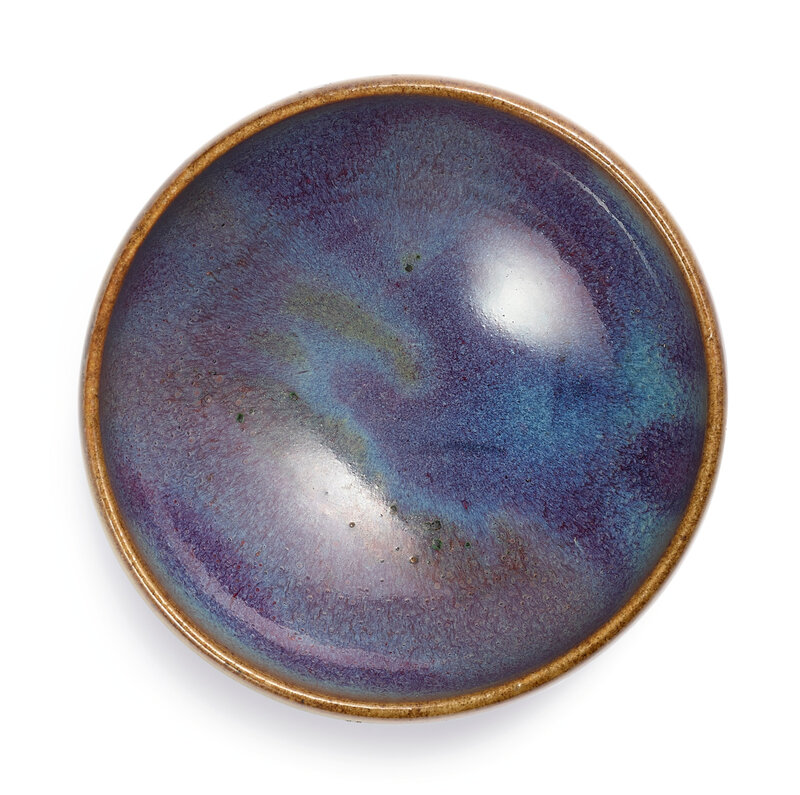 exquisitely potted with steep rounded sides rising from a short foot to a gently incurved rim, unctuously applied overall save for the foot with a pale milky-blue glaze draining to a mushroom tone at the rim and pooling short of the foot, the exterior and interior liberally and extensively decorated with vibrant reddish-purple and lavender splashes.

This colourful little bowl is one of the most spectacular ‘bubble’ bowls preserved from the Jun kilns of Henan province. The dramatic, variegated, deep purple colouration that covers most of the inside, and the attractive, intense bluish-red pattern on the bright blue glaze on the outside, where the colour has been applied in a bold movement, forming an undulating pattern, give this bowl a distinct identity. Junyao pieces of this calibre have the timeless beauty of abstract paintings.

This vessel, in the West known as a ‘bubble’ bowl, is one of the rare pieces fully warranting that name, since the glossy glaze on its inside evokes a most striking soap-bubble illusion: Reflected lights seem to float high above the walls on an imaginary soap bubble rising over the rim, rather than to stem from the glaze surface inside.

‘Jun’ ware, with its ravishing purple-and-blue colour combination, is one the most daring creations in the history of Chinese ceramics and certainly the most flamboyant of the major wares of the Song dynasty (960-1279). It is exceptional also because its basic, bright sky-blue glaze colour derives not from a pigment but from an optical illusion – indeed not unlike the blue of the sky – as minute spherules of glass in the glaze are scattering blue light. The red derives from a copper-rich pigment applied to the blue glaze, which is difficult to control in the firing and thus particularly unpredictable in its outcome. This chance effect is part of the ware’s attraction, making every piece unique, with individual patterns and tonal variations created as if by nature.

Song connoisseurs were extremely advanced in their taste. If the aristocracy in most regions and periods generally valued expensive materials, complex forms and designs, and reliable precision in their artefacts, the Song ruling elite, right up to the imperial court, was able to appreciate simplicity, asymmetry and abstraction. Only thus can one explain the high regard for vessels such as this bowl, which could be the work of a contemporary artist, a thousand years ago.

‘Jun’ ware is also unusual among the important Song wares in being thickly potted, thus lending itself to simple shapes. Among the various ‘Jun’ ware bowl shapes, perhaps the most delightful is that of these small bowls, probably used for wine, with their well-rounded, plump and pleasing forms, elegant in profile because of the small foot and in-turned lip, appealing to hold in one’s hands and to drink from.

‘Jun’ wares were produced by many different manufactories in Henan, including the Ru kilns at Qingliangsi in Baofeng, as evidenced by archaeological excavations, see Baofeng Qingliangsi Ruyao/Ru Yao at Qingliangsi in Baofeng, Zhengzhou, 2008, col. pl. 183; and Gugong Bowuyuan cang Zhongguo gudai yaozhi biaoben [Specimens from ancient Chinese kiln sites in the collection of the Palace Museum], vol. 1: Henan juan [Henan volume], Beijing, 2005, passim. The centre of production, where the finest wares were produced, was located in the modern county of Yuxian, in the former region of Junzhou, where several kilns have been excavated and where bowls such as this were made; fragments of plain blue and purple-splashed ‘bubble’ bowls excavated there are illustrated ibid., pl. 447.

Although many fine ‘bubble’ bowls with fewer purple splashes are known, few show a glaze of such breathtaking vibrancy as the present piece. As comparisons, two of the best extant examples come to mind, the two ‘bubble’ bowls from the Edward T. Chow collection, both also with deep overall purple colouration inside and a more distinctly painted purple ‘pattern’ outside, both sold in our London rooms, 16th December 1980, lots 264 and 265 (figs 1 and 2); the former was sold again in these rooms from the T.Y. Chao collection, 19th May 1987, lot 209, and at Christie’s New York from the Jingguantang collection, 16th September 1998, lot 359; the latter in our London rooms, 7th June 2000, lot 93. 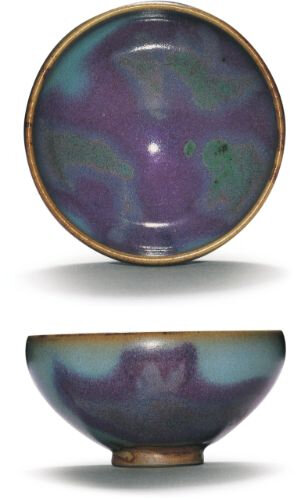 A related bowl in the Palace Museum, Beijing, with fewer purple areas and apparently a paler blue glaze is illustrated in Jun ci ya ji. Gugong Bowuyuan zhencang ji chutu Junyao ciqi huicui/Selection of Jun Ware. The Palace Museum’s Collection and Archaeological Excavation, Palace Museum, Beijing, 2013, pl. 36; and a slightly smaller bowl in the Palace Museum, also with less purple on the blue glaze, is published in The Complete Collection of Treasures of the Palace Museum: Porcelain of the Song Dynasty, Hong Kong, 1996, vol. 1, pl. 222. Other ‘bubble’ bowls with sparser purple splashes are, for example, in the Baur Collection, illustrated in John Ayers, The Baur Collection Geneva: Chinese Ceramics, Geneva, 1968-74, vol. I, nos A 31 and A 32; in the Victoria & Albert Museum, London, from the Eumorfopoulos collection, published in Rose Kerr, Song Dynasty Ceramics, London, 2004, pl. 26 front; and in the Sir Percival David collection in the British Museum, illustrated in Stacey Pierson, Song Ceramics: Objects of Admiration, London, 2003, pl. 20.