A rare anhua-decorated blue and white ‘Dragon’ bowl, Xuande six-character mark and of the period (1426-1435)

A rare anhua-decorated blue and white ‘Dragon’ bowl, Xuande six-character mark and of the period (1426-1435) 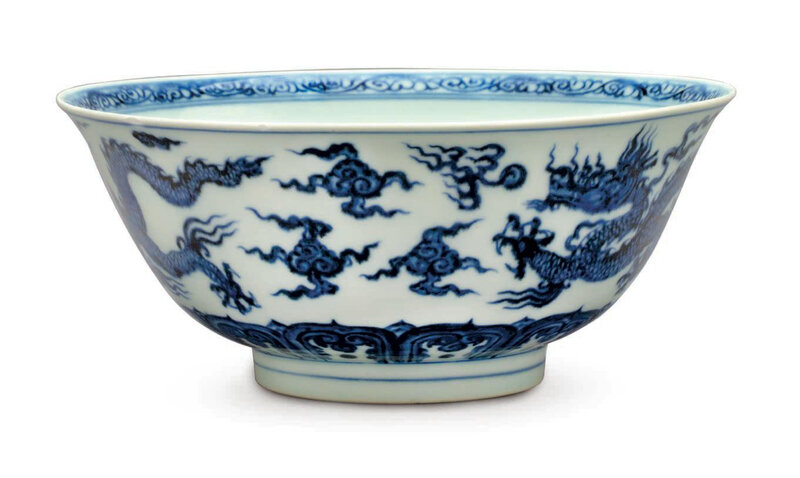 Finely potted with deep rounded sides rising to the slightly flaring rim, decorated on the exterior in brilliant tones of cobalt blue with two five-clawed dragons striding through cruciform clouds in pursuit of 'flaming pearls' above a band of overlapping lappets, the interior with a central medallion of a descending dragon amidst clouds encircled byanhua decoration of two five-clawed dragons on the cavetto, below a band of classic scroll at the mouth rim.

The Collection of Peggy and David Rockefeller. John D. Rockefeller, Jr, and trustees at the Peking Union Medical College in 1921. Photograph courtesy of the Rockefeller Archive Center

Note: With its fone potting and powerful decoration in both underglaze blue and the anhua (hidden decoration) style, this extremely rare bowl represents the finest quality of porcelain produced at the imperial kilns in the Xuande reign. The design of an imperial five clawed dragon flying through the clouds and chasing a faming pearl is one of the most classic motifs of Chinese porcelain, and yet one of the rarest patterns of the Xuande repertoire. No other example of this exact form and decoration appears to be published. Two Xuande bowls of very similar design on the exterior but with cloud-scroll motifs on the center of the interior, are in the National Palace Museum, Taipei, illustrated in A Panorama of Ceramics in the Collection of the National Palace Museum: Hsuan-te Ware I, Taipei, 2000, nos. 64 and 65.

This design originated in as early as the Hongwu period (1368-1398) as seen on a blue and white and molded bowl in the Tianminlou collection, illustrated in The Radiant Ming 1368-1644 through the Min Chiu Society Collection, Hong Kong, 2015, p. 18, no. 1. However, it was not until the Yongle period (1426-1435) that this design became standardized. A Yongle blue and white stem bowl of very similar decoration with fitted gold cover and silver stand was found in the tomb of Prince Zhuang of Liang in Zhongxiang city, Hubei province, illustrated in the British Museum, Ming: 50 years that changed China, London, 2014, p. 87, fg. 70. On the Prince Zhuang of Liang example, not only the porcelain stem bowl but also the gold cover and silver stand bear a conforming fve-clawed dragon design. It is important to note that an inscription on the gold cover dates it to the second year of Zhengtong (1437). The consistency of this design across precious mediums and different reign periods might suggest that in the early 15th century this design became one of the standard designs supplied by the court to various imperial workshops. Bowls of this type continued to be made in the following periods in the Ming dynasty (1368-1644) such as a Chenghua (1465-1487) example and a Hongzhi (1488-1505) example in the Shanghai Museum, illustrated by Lu Minghua in Porcelain Wares from the Offcial Kilns of the Ming, Shanghai, 2007, fg. 3-61 and fg. 3-69 respectively. Xuande ‘dragon’ bowls of this form also exist in a slightly different version, in which the dragons have three claws and the interiors are decorated with various foral scrolls and sprays in underglaze blue. This group includes four examples in the National Palace Museum, Taipei, illustrated in ibid, nos. 69-73; one in the British Museum, illustrated by Jessica Harrison-Hall, Catalogue of Late Yuan and Ming Ceramics in the British Museum, London, 2001, p. 134, no. 4:26; one in the Matsuoka Art Museum, Tokyo, illustrated in the Toji Taikei (Ceramics of East Asia), vol. 42, Tokyo, 1975, fgs. 51 and 52; and the other one sold at Sotheby’s Hong Kong, 2 November 1994, lot 36. As noted by Liao Pao-show from the National Palace Museum, on the three-clawed dragon group the lappets borders below the dragons are separated, see A Panorama of Ceramics in the Collection of the National Palace Museum: Hsuan-te Ware I, op. cit., p. 198.

These bowls were so admired by the emperors in the 18th century that they had close copies made at the imperial kilns, as shown by the 18th century example with apocryphal Xuande mark sold at Christie’s Hong Kong, 2 October 2017, lot 129.

Christie's. The Collection of Peggy and David Rockefeller: Travel and Americana, New York, 10 May 2018