The elegantly proportioned vessel in the form of an open upturned lotus leaf raised on a slightly recessed foot, masterfully carved in high relief with four writhing powerful chilong clambering around the sides of the vessel decorated in low relief with a border of archaistic taotie masks reserved on a leiwen ground divided by a curling flange on one side, the other side flanked by a curving double-strap handle, all below a key-fret border and above a band of lotus lappets, the horn of an attractive dark brown tone.

Provenance: A distinguished European private collection, on loan to the Oriental Museum, Durham, from the mid-1970s to circa 2011

Note: The present lot is a testament to the exceptional craftsmanship of rhinoceros horn carving achieved in the early Qing dynasty. The cup incorporates a remarkable array of crisply carved multi-layered decorative elements: from the very rare motif of a lotus-lappet border above the foot, which is clearly inspired by similar lappet borders painted on 14th and 15th century porcelain, as well as mirroring the nature-inspired lobed lappet form and rim of the cup, so suitable for the natural shape of the rhinoceros horn; to the antiquity-inspired taotie masks, leiwen ground, the ridged flange, the chilong and double handle. 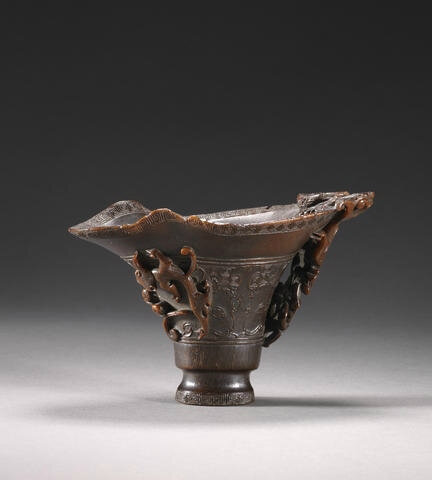 Formed in the shape of a radiating chrysanthemum petals raised on a high foot of conforming shape detailed with a keyfret band repeated on and below the rim, finely carved around the lobed mid-section in medium relief with a band of archaistic phoenix scroll above a skirt of triangular pendant lappets, further detailed in high relief with seven chilong clambering playfully over the sides, over the rim to the interior, the handle formed by two powerful large dragons spanning the length of the cup along the side, one of which extends over the edge of the rim peering over the side facing a chilong carved in the round to the interior of the cup, the deeply inset base carved in high relief with an additional coiled chilong, the material of an attractive golden amber tone. Estimate HKD 3,500,000 - HKD 4,500,000.

Note: The carver has gone to great lengths to depict each of the dragons and chilong in individual detail and with great vigour, even carrying the theme to the bottom of the cup with an unusual chilong roundel.
A bowl from the Edward and Franklin Chow Collections illustrated by J. Chapman, The Art of Rhinoceros Horn Carving in China, London, 1999, p. 155, pl. 189, shares the same intricate design of dragons continuing on the base with a dragon roundel. Compare also an archaistic cup of similar design with various mythical creatures around the sides and a coiled dragon in the recessed base from the Songzhutang Collection, sold at Christie's Hong Kong, 27 May 2008, lot 1725.