A fine and large bronze figure of a Daoist immortal, 16th-17th century

A fine and large bronze figure of a Daoist immortal, 16th-17th century 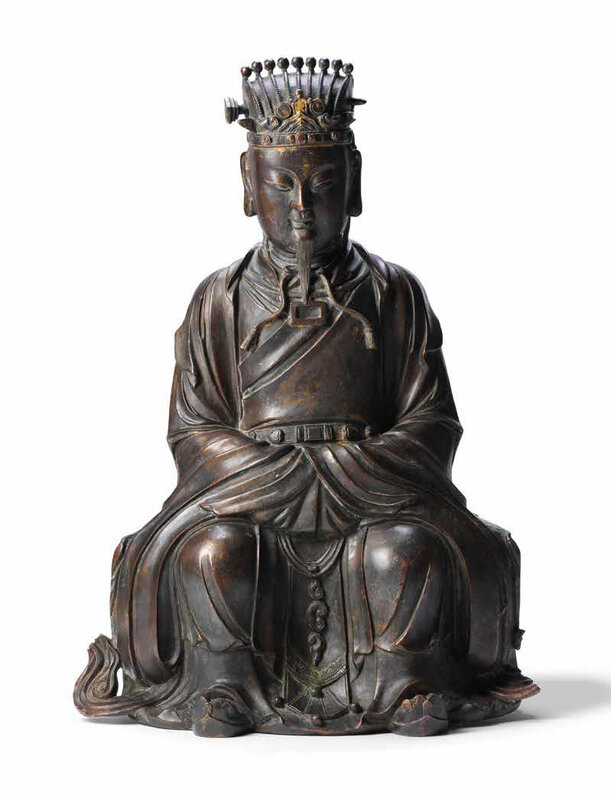 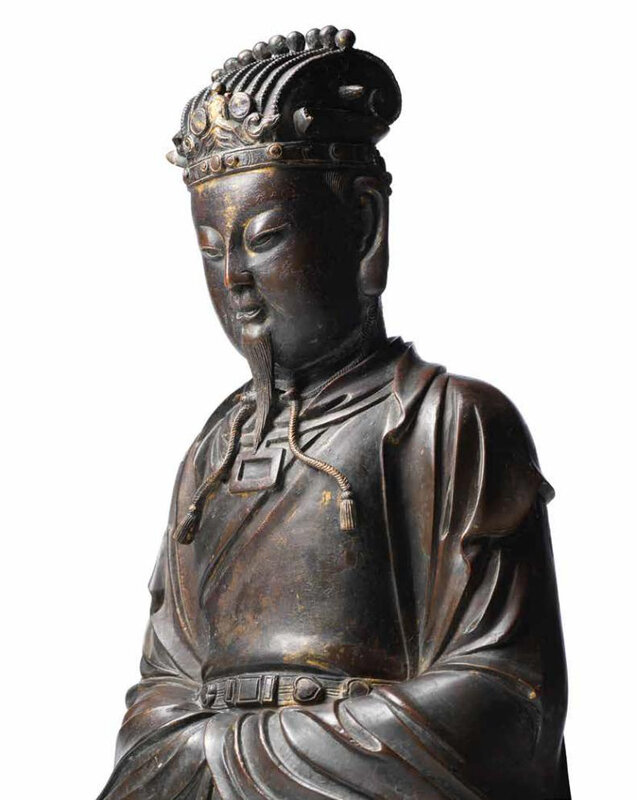 The sage heavily cast seated as a dignitary wearing an elaborately decorated cap of office with long flowing ribbons, his beard hanging down his chest embellished with a rectangular-shaped clasp holding the robe, his hands swathed in the long pleated robe resting on his laps, the figure with traces of gilt-lacquer, the wood stand carved as a throne.

Note: The Daoist Immortal figure with his hands swathed under the robe may represent Tianguan, the Heaven Office, one of the Three High Officials of Daoism and sometimes identified as the 'Star' God of Happiness. Daoism flourished in the Ming dynasty under Imperial patronage, especially under the Jiajing and Wanli emperors who were fervent supporters of Daoist practices.

Relatively small number of bronze figures are known to have survived of this large size and impressive weight. Compare a large bronze figure of Mingzhen dadi, Ming dynasty, currently in the Ancient Bronze Shrine on the Wudang Mountains, illustrated by Zhang Jiyu, The Great Series of Daoist Immortal Statues, Beijing, 2012, p.361; compare another similarly attired gilt-bronze figure of Tianguan, 16th century, which was sold at Christie's New York, 20 March 2014, lot 1627; and a large gilt-lacquered bronze figure of a Daoist immortal, 17th century, which was sold at Sotheby's Hong Kong, 30 November 2017, lot 442. The figure, with benevolent expression, is finely cast in a seated position with hands clasped together in front of the chest, and wearing a voluminous robe that falls to the top of his ruyi-toed shoes and is secured with a court belt and a long sash tied in a bow between the legs. The borders are variously engraved with dragons chasing flaming pearls, floral scroll and zabao (miscellaneous treasures). The deity also wears a ribbed headdress secured by a hairpin and hung with cords that trail behind the ears and are then crossed above a lock-form pendant, stand.

Note: This imposing figure, with his handsome and benevolent features, most likely represents Tianguan, the Heaven Official, one of the Three High Officials of Daoism. His role is to give people their alloted share of luck and happiness, and he is also sometimes identified with Fuxing, the "star" god of Happiness.

The type of ribbed court hat ("curling cloud crown"), robe, ruyi-toed shoes and the lock pendant worn by this figure appear to be based on the emperor's court dress during the Song dynasty, which is represented by reconstructions based on historical documents and "Portraits of monarchs of Various Dynasties" exhibited at Nanxu Palace, illustrated by Zhou Xun and Gao Chunming in 5000 Years of Chinese Costumes, Hong Kong, 1984, pp. 108-9, figs. 185, 186, and 188. Also illustrated, p. 109, fig. 189, is a painting of the Emperor Song Xuanzu wearing this type of court dress.

This court dress continued into the Ming dynasty, and is the type worn not only by the present figure but also related Daoist deities depicted in paintings of early Ming date. See, for example, the seven star-gods of the Central Dipper depicted in a painting entitled, Lords of the Root Destiny Stars of the Northern and Central Dippers, dated Jingtai reign, 1454, published by Stephen Little in Daoism and the Arts of China, The Art Institute of Chicago, 2000, p. 248, no. 78. The author notes that the hats worn by these deities distinguished their places in the celestial hierarchy.

The same hats are also worn by two Daoist deities in a painting, Gods of the Twenty-eight Lunar Mansions, also dated to 1454, in the Museé National des Arts Asiatiques Guimet, Paris, illustrated ibid., p. 249, no. 79. The court hats worn by the Daoist deities in the two paintings are tied under the chin with cords, while on the present figure these cords fall behind the ears and are crossed together neatly above the rectangular lock pendant. This variation is perhaps an attempt to render the task of casting easier when transforming such figures into the sculptural form. This same depiction of the cords is seen on a large, similarly attired, stone figure of an official standing along the spirit road to a Ming-dynasty imperial tomb in the Changping District, Beijing, illustrated in Zhongguo Meishu Quanji; Yuan Ming Qing diaosu, vol. 6, Beijing, 1988, p. 118, no. 128. 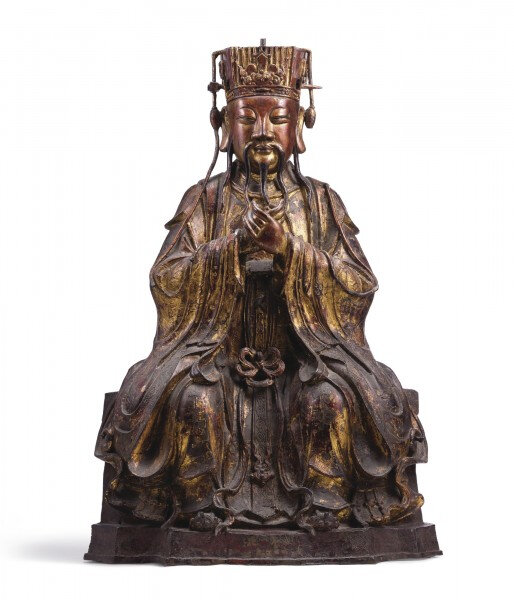 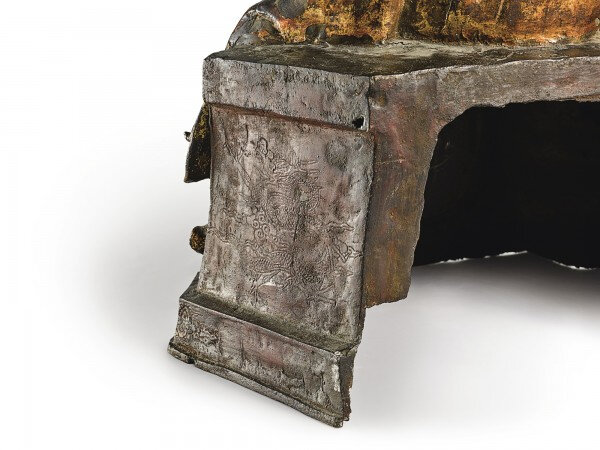 possible depicting Wenchang Wang, cast seated on a chamfered pedestal with the hands folded before the chest, wearing loose robes engraved with dragons, the shoulders similarly decorated with roundels enclosing the sun and the moon respectively, the bearded face with a benevolent expression flanked by long pendulous ears, crowned by a tall official hat decorated with mountain and waves.

Note: Finely cast as a Daoist immortal wearing long robes sumptuously decorated with Daoist symbols, this figure is notable for its impressive size which together with the traces of gilt lacquer, hint at its original splendour. While its identification can only be speculated, the figure’s court attire, rectangular pendant around the neck and tall court hat are indicative of his elevated position in the Daoist pantheon. It may depict Wenchang Wang, also known as Wenchang dijun, the Daoist god of Culture and Literature, who is often depicted holding a ruyi-sceptre or a tablet.

The robe, ruyi-toed shoes, dragon design and lock pendant may be linked to a particular style of court dress that evolved from the Song dynasty through the Ming period, and was also worn by high-ranking figures in the Daoist pantheon.

Daoism flourished in the Ming dynasty under the Jiajing and Wanli Emperors, who were fervent supporters of Daoist practices promising the attainment of immortality. During the sixteenth and early seventeenth centuries, numerous bronze figures of Daoist deities were cast under imperial patronage or commissioned by wealthy families.