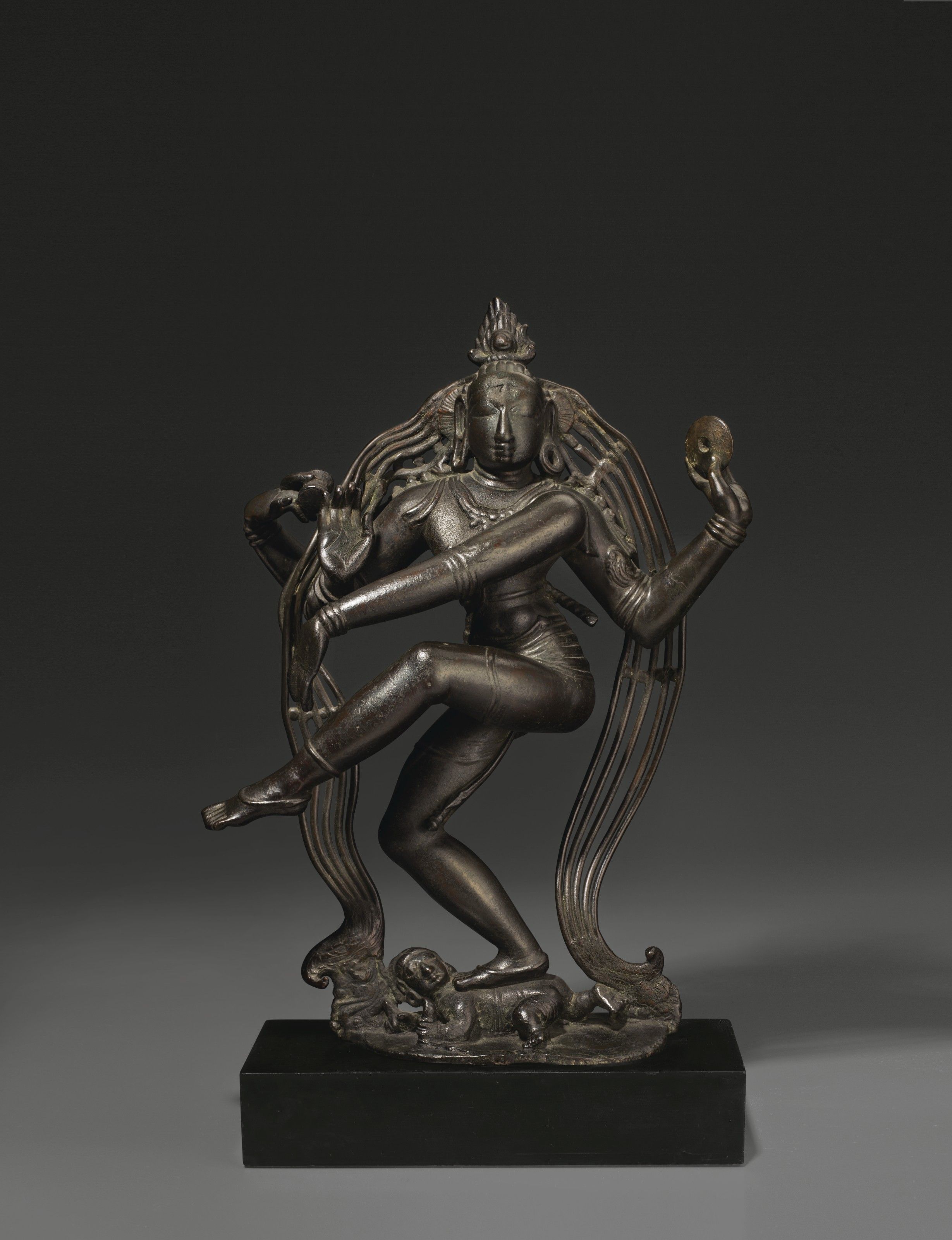 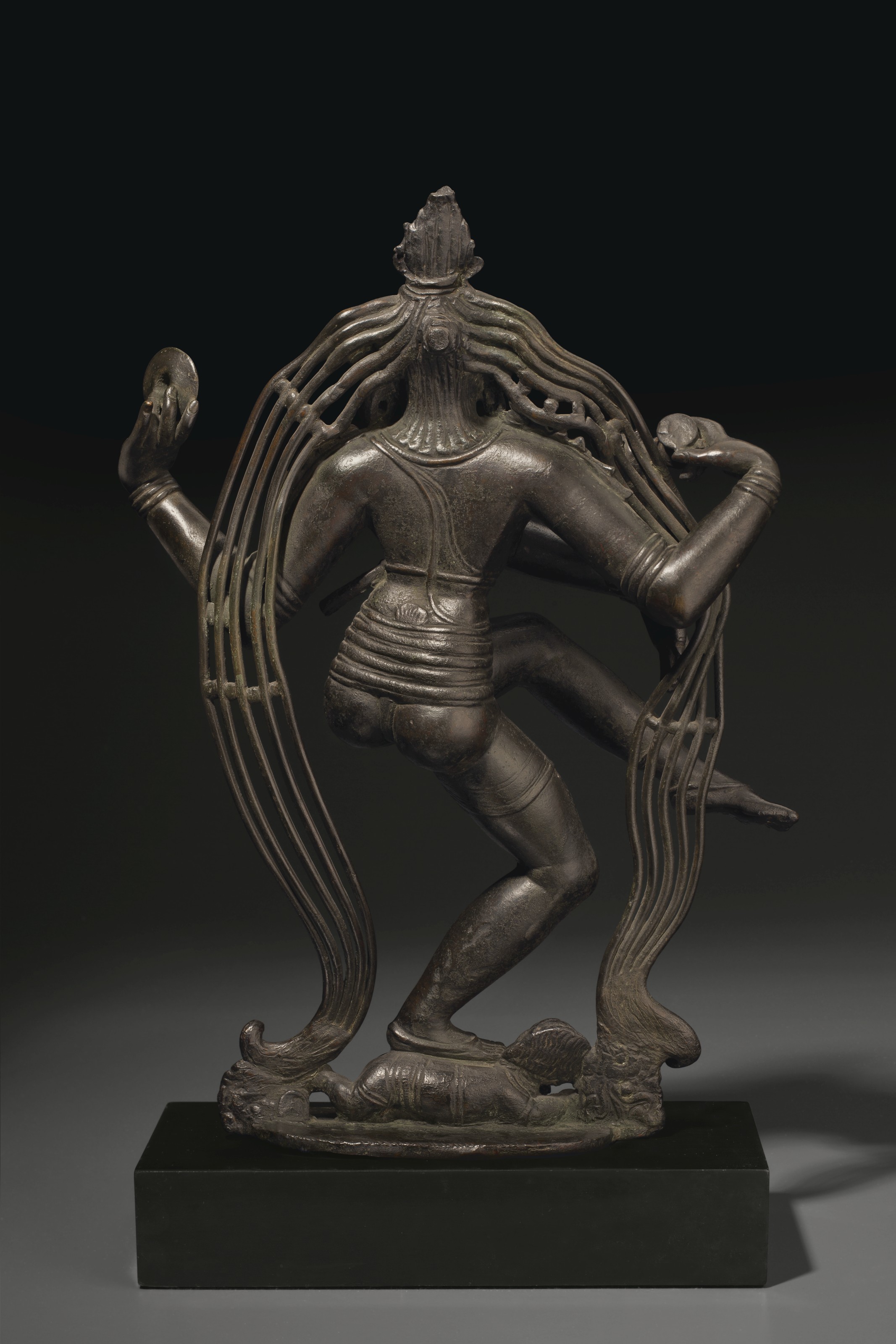 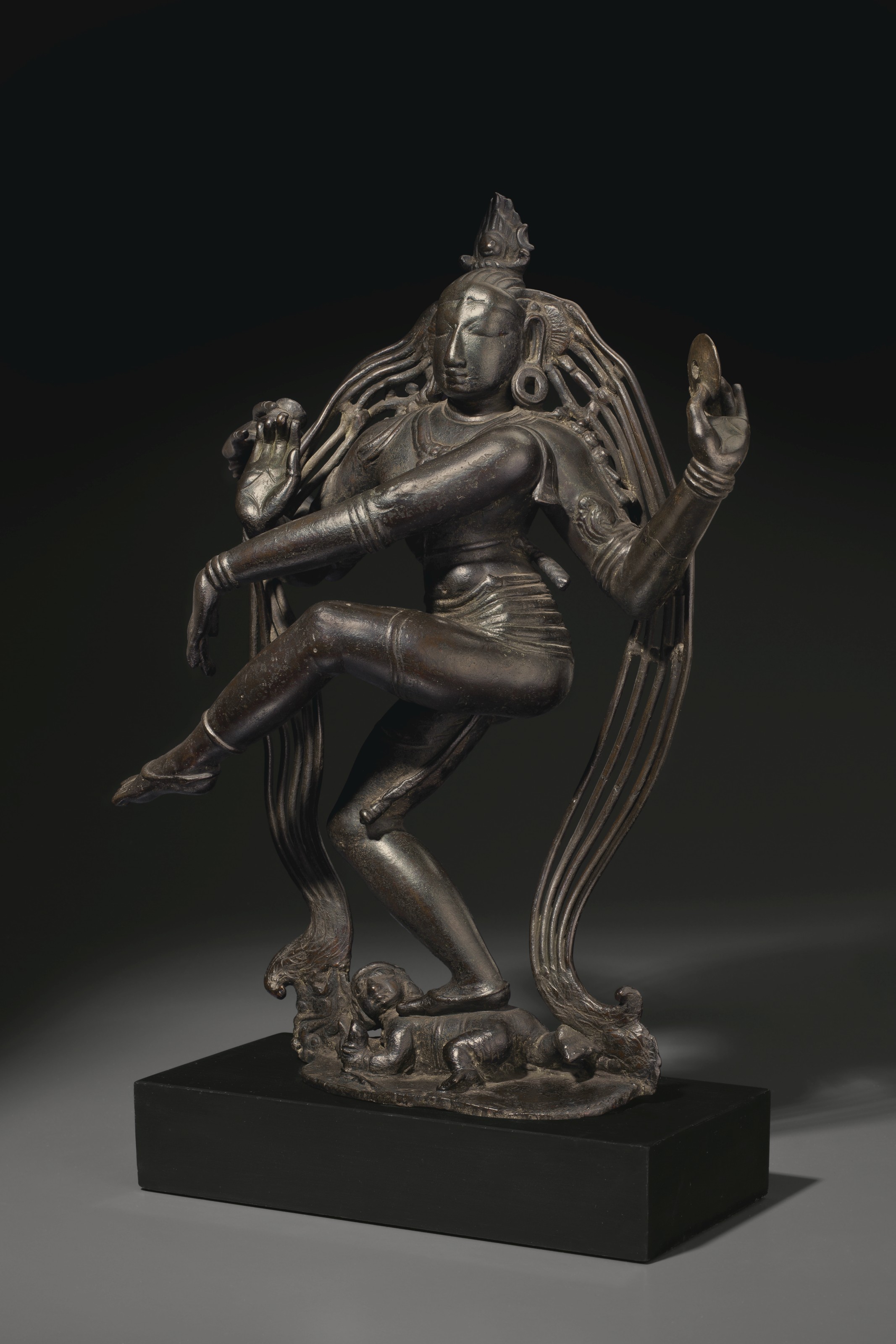 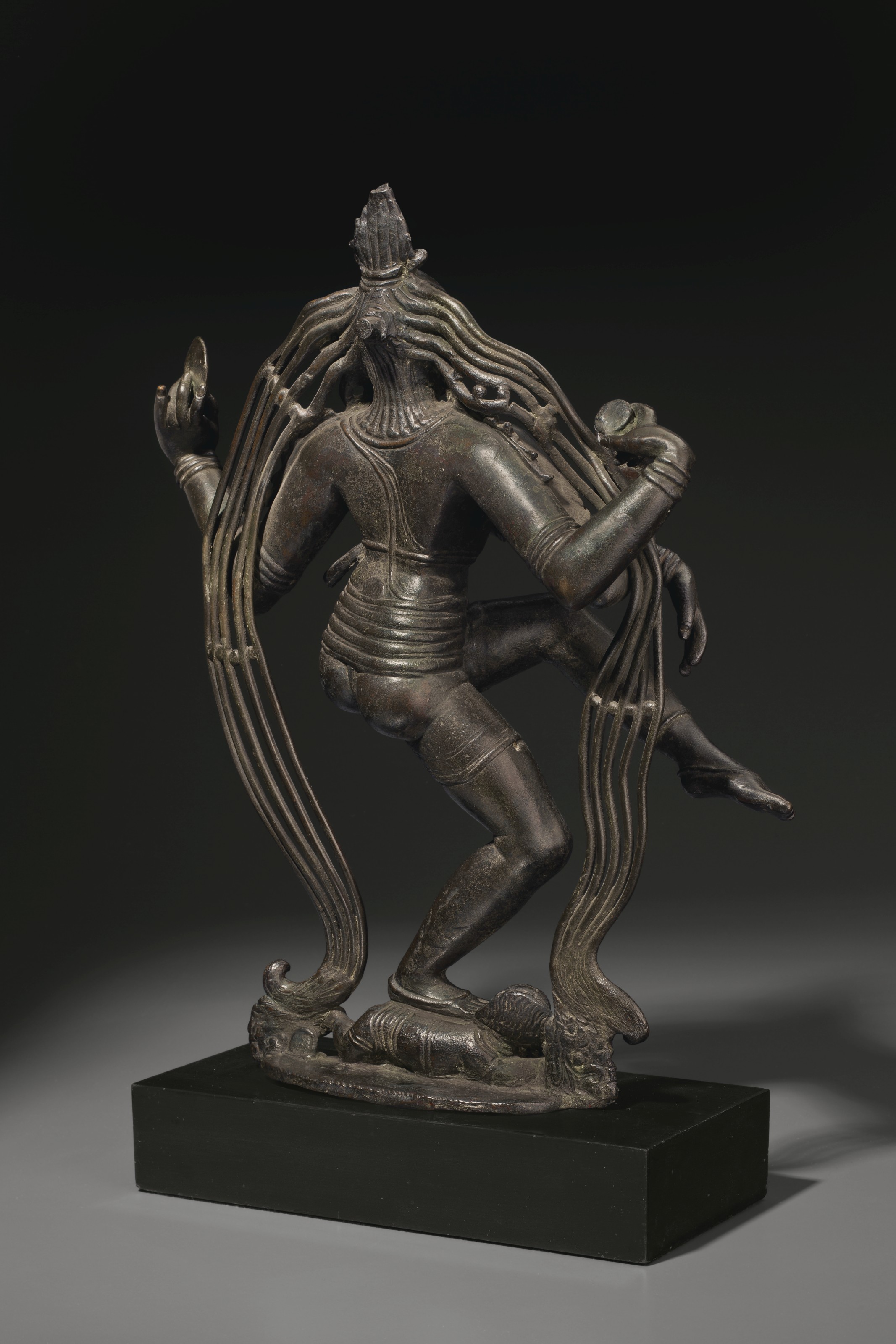 Dancing over the dwarf Apasmarapurusha with his left leg raised, his principal right hand in abhayamudra and his principal left hand pointed towards his raised foot, holding a damaru and chakra in his other hands, surrounded by his flowing tresses.

Note: This extraordinary and exceptionally rare image of Shiva depicts him as both Nataraja, the Lord of the Dance, and as Gangadhara, “he who bears the Ganges River.” As Nataraja, he dances in Anantatandava: with his left leg raised, he balances on the dwarf, Apasmarapurusha, the demon of ignorance and indolence. His primary right hand is raised in the reassuring abhayamudra (fear-abiding gesture), while his primary left hand is in gajahasta (elephant-trunk gesture), indicating the defeat of ignorance that hinders the realization of the universal truth. In his secondary right hand, he holds the damaru symbolizing the sound of creation - the Big Bang - whose cosmic vibrations perpetuate the universe. As Nataraja, his other hand should hold agni, the fire which signifies the final destruction out of which a new world will arise. However, as Gangadhara, this flame would be snuffed out by the descent of the Ganges river. Instead, the artist has cleverly substituted a chakra, the quintessential symbol of cyclical time, and which also gives rise to re-creation by its destructive nature.

Natasha Eilenberg, wife of Sammy Eilenberg, collaborator to Jean Boisselier, and close friend to Mr. Ellsworth, has made a close study of this work. Previously this work has been published as 11th century (see P. Pal, 1974), and more recently it has been dated to the 9th century (see Eilenberg, 1997 and J. Casey, et al., 2003). Initially, Boisselier had observed that the metal alloy was a type used by the Eastern Chalukyas (c. 642-1061 AD), as evidenced by the wear to the face (Eilenberg, 1997, p.166.) In exploring this idea further, Eilenberg also observed a variety of stylistic influences from Pandyan and Pallava times – including the wide headband, motion of the shoulder tassels, arrangement and number of the jatas on the back, and that Apasmarapurusha is playing with two snakes instead of one – all of which support an Eastern Chalukyan origin and earlier casting. According to Eilenberg, “I have yet to see another image of Shiva Nataraja or of Gangadhara where her aquatic descent is depicted so eloquently and gracefully… I might add that [the Nataraja’s] momentum and its grace will seldom be equaled or surpassed by four-armed dancing figures of later Chola art.”

This superb sculpture was placed fittingly above the fireplace on the mantelpiece in the living room, one of the main rooms where Mr. Ellsworth entertained his guests, and where works from across the world were juxtaposed, inviting discussion of their varying merits.