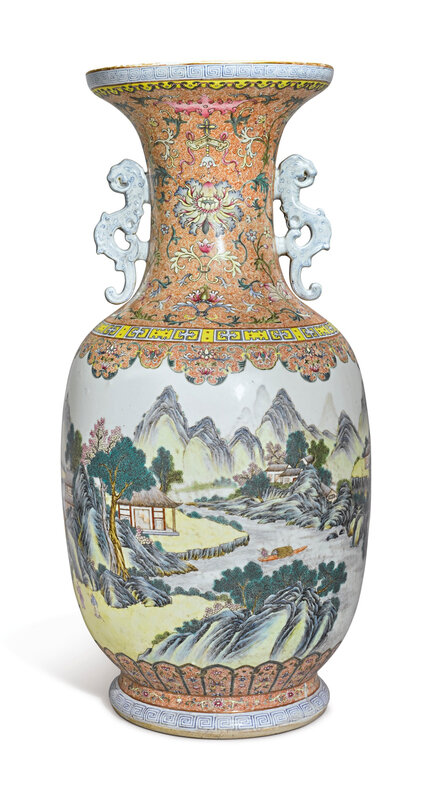 stoutly potted with the ovoid body rising from a splayed foot to a waisted neck and flared rim, the neck flanked by a pair of phoenix-form handles, finely painted around the body with a continuous landscape depicting a large walled compound of storied pavilions built on a lake island surrounded by jagged rockwork and trees, distant figures standing on the grassy banks or crossing over an arched bridge, leading to further pavilions, islands, and river paths, misty mountains in the far distance, all between an opulent ground of polychrome lotus blossoms and floral scrolls over a dense network of iron-red coiling leafy vines at the foot and neck, the interior and base enameled turquoise, the latter inscribed in iron red with a six-character seal mark reserved in a white square.

Note: This sumptuous vase is a striking display of the virtuosity of the craftsmen working during the Qianlong period in both its massive size and decoration. It seamlessly combines the idealized Chinese landscape with European-inspired curling fronds to result in a piece that celebrates both tradition and exoticism. Such vessels are marvels of the Qianlong period, of which only a small group was produced, and represent the Qianlong emperor’s personal taste which increasingly gravitated towards porcelain designs that were artistically complex.

Favored by members of the court and scholar elite as they provided an escape from the duties and responsibilities of official life, idealized landscape scenes were frequently portrayed on a variety of vessels made of precious media but are rather rare on Qianlong porcelain. Such continuous scenes encircled the vessel like a painting on an unrolled hand scroll, and required not only accomplished brushwork but also particular skill at composition. Mountainous landscapes featuring pavilions in richly colored vegetation among towering rockwork and expanses of water were applied to porcelain by Tang Ying (1682-1756), superintendent of the Jingdezhen imperial factory and a gifted painter himself. Scenes marked with his seal, either painted by him directly onto the vessel or transferred there from his ink paintings by professional porcelain decorators, have survived from the early Qianlong period; see, for example, Peter Y.K. Lam, 'Tang Ying (1682-1756). The Imperial Factory Superintendent at Jingdezhen', Transactions of the Oriental Ceramic Society vol. 63, 1998-9, pp 65-82, figs 8 and 9, where a landscape painting by Tang Ying is compared to a porcelain vase with similar decoration from the collection of Paul and Helen Bernat, sold in these rooms, 15th November 1988, lot 52.

With its combination of dramatic mountain scenery with European-inspired scrollwork on a sgraffiato-simulated ground, this vase represents a somewhat later stage of porcelain decoration in the Qianlong reign.The rich web of iron-red feathery scrolls gives the impression of a pink ground when viewed from a distance and it is only upon closer inspection that the full effect can be appreciated. A sense of exoticism is achieved through the clever incorporation of rococo-esque curling fronds in the ruyi lappets bordering the shoulder and interwoven in the lotus scroll neck and foot. Furthermore, the gilt-painted rim and foot, together with the archaistic handles enameled in blue, heighten its opulence in their imitation of painted metal-bodied wares that were also rapidly developing concurrently.

Although the individual elements of both shape and decoration are all well-known from this reign, close counterparts are difficult to find, since the Qianlong potters were masters at combining their many style elements in myriad ways to create ever new designs. Compare a pair of vases, with Qianlong marks and of the period, their wide cylindrical bodies painted with a related landscape scene and bordered by a pink ground accented with a darker pink feathery scroll and flanked by a pair of archaistic ‘C’ shape handles, from J.T. Tai Co. Ltd., sold in our Hong Kong rooms, 7th October 2010, lot 2130. A vase of this type, but lacking the reign mark and attributed to the Qianlong period, was sold at Christie’s Hong Kong, 29th-30th October 2001, lot 856.

It is rare to find Qianlong mark and period vases of such large size and only a small number appear to have been published, all with elaborate archaistic handles and different decoration; a coral-ground version enclosing figural panels on the body and neck, in the Palace of Fontainebleau, is illustrated in situ in Le Musée chinois de l’impératrice Eugénie, Paris, 1986, p. 24; another, also painted with figural panels against a turquoise ground, was sold at Christie’s New York, 14th September 2017, lot 748; and a third, but lacking the galleried lip and of slightly larger size, decorated with flowers on a yellow ground and archaistic dragon handles, from the collection of Alberto Pasini, was sold in our Hong Kong rooms, 7th April 2015, lot 3608. 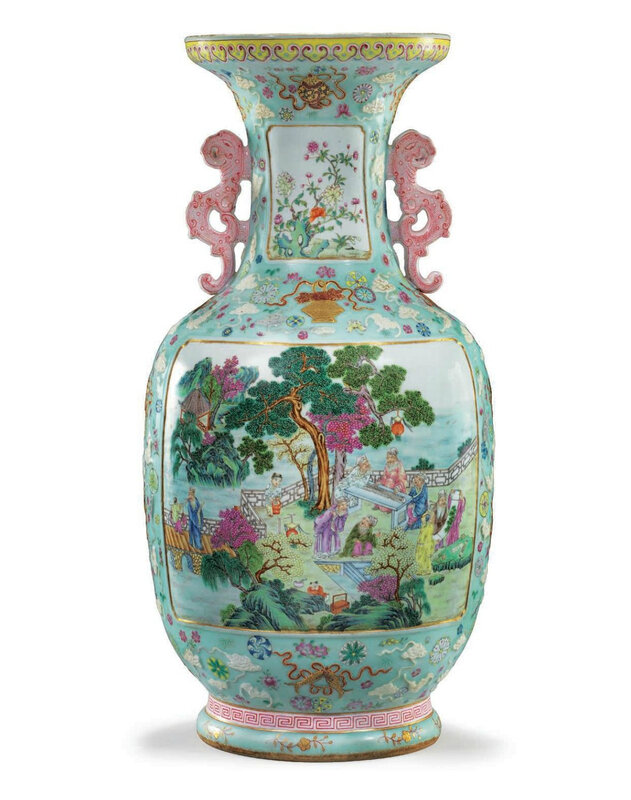 Cf. my post: An exceptional rare and large famille rose vase, Qianlong six-character seal mark in iron red and of the period (1736-1795)