In 1761, Jin Nong (1687-1763), at the age of 75, executed Seeking Inspiration Amongst Plum Blossoms and dedicated it to his very good friend, Yinluo or Zhang Yuemei. Zhang’s free and easy character allowed him to befriend many literati of his time. In 1816, his grandson Yunchen or Zhang Tingjie asked his colleague of six years and friend, Chen Hongshou (1768-1822) the scholar-official, to inscribe a colophon and frontispiece on this painting of his family collection. Zhang was so proud of this work by Jin Nong that he further showed it to his friends including Fan Fengxie and Lu Yushu (both 18th-19th Century) whose colophons dated 1818 and 1822 respectively can be found on this handscroll. A total of sixteen collector’s seals, including those of illustrious art collectors and connoisseurs like Jin Futing (19th Century), Li Yufen (19th Century) and Yang Shoushu (1863-1944) are identified in this work. Its titleslip and the label on its wooden box reveal that the painting was once belonged to ‘A Hundred Plum Blossoms Studio’ owned by Chen Shutong (1875-1966), a respected politician and an avid collector of Chinese painting. Seeking Inspiration Amongst Plum Blossoms have been cherished by the current owner and his family for more than seven decades.

First amongst the Four Gentlemen in Chinese art, plum blossom serves as a metaphor for the virtues of a scholar: resolute, noble and pure. Since the Song dynasty, literati have been praising plum blossom in poetry and painting. It thrives in the desolate and severe winter, just like a noble person being unswervng and fearless under adverse conditions. A native of Hangzhou where many eminent literati lived, Jin Nong was one of the Eight Eccentrics of Yangzhou, a group of painters famous for their unconventional artistic styles. Jin’s unsurpassed talent in literature and the arts made him the best amongst them. Since 1753 he had been prolific in painting plum blossom for expressing his sentiments and catering the demand and taste of the rich in Yangzhou. Unique and out of the ordinary, Jin’s plum blossom paintings are creations inspired by the unusual and soul-revealing examples of his predecessors, and works by his
contemporaries such as Wang Shishen (1685-1759), Gao Xiang (1688-1753) and Li Fangying (1696-1755).

Quaint and Simple, Alienated yet Evocative

Seeking Inspiration Amongst Plum Blossoms exemplifies the flourishing moment in a poetic way. One frigid day by the shore, a scholar, standing tall beside a plum tree with pink blossoms surrounded by those with white blossoms, was contemplating with his hands holding in the sleeves. Behind him was his servant, brewing tea under the white plum blossoms while looking at his master, who seemed to be wondering what his verse of the day would be. In a descriptive mode highly charged with calligraphic brushstrokes stemmed from the seal and clerical scripts and together with the use of light ink and colour washes, Jin Nong portrayed an alienated and a simple yet evocative setting which possibly drawn from his own experience. The inscription and signature in chiseled, idiosyncratic characters dangled from the top left corner of the scroll compliment the composition and accentuate the quaintness of the painting.

Of all the plum blossom paintings by Jin Nong, very few are rendered in colour and those modeled in a story-telling fashion are extremely rare. A peach blossom painting of similar composition and use of light ink and colour, is found on the eighth leaf of Figures and Landscapes album by the artist dated 1759, now in the Palace Museum of Beijing (see Illustration). 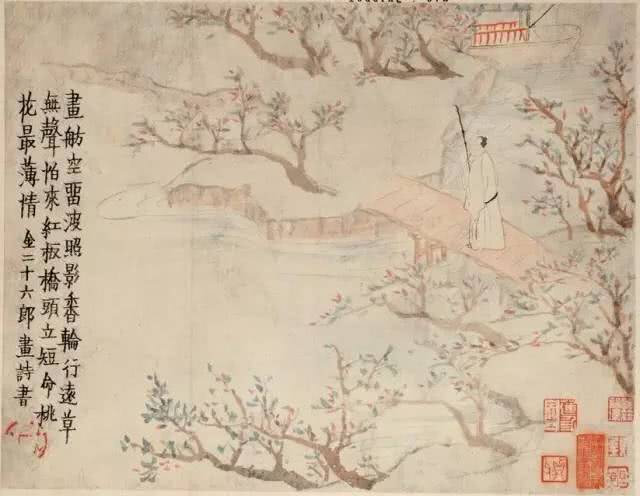