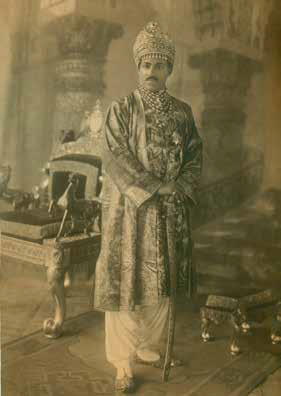 These two lots offered for sale were purchased in London by Sir Sadiq Muhammad Khan Abbasi (1904-1966). Sir Sadiq was the Nawab of Bahawalpur, which was a princely state of British India and later Pakistan before it became part of Pakistan’s Punjab province. As Nawab of Bahawalpur State, Sir Sadiq was a widely popular and generous ruler. He invested heavily in both agriculture and education within Bahawalpur, whilst also becoming the first ruler of a princely state of British India to successfully transition to the new Dominion of Pakistan.

Sir Sadiq was a close friend of Muhammed Jinnah, the politician and founder of Pakistan. He proved to be an asset to the newly formed Pakistan, giving tens of millions of rupees to the government and over 2,000 acres of land for The Sadiq Public School which he inaugurated in 1954 and is still today one of the largest schools in Pakistan. Sir Sadiq also served as an ambassador, initially for Bahawalpur and then for Pakistan, whom he represented at the installation of King Faisall II of Iraq in 1953 and then at the coronation of Queen Elizabeth II, who was also Queen of Pakistan until 1956.

Sir Sadiq enjoyed travelling and collecting cars, art and jewellery. Over the years he owned various properties, and spent a great deal of time in England, where he purchased these two jewels which were subsequently gifted to his daughter, from whom the current owner has inherited them. Accompanied by a photocopy of a valuation for insurance from Garrard, dated 7 May 1991. The bracelet of scrolling design decorated with a row of multi-coloured gems, including peridots, amethysts, spinels, and garnets graduating in size to a principal step-cut rubellite tourmaline, highlighted by old brilliant-cut and table-cut diamonds, and cushion-shaped and calibré-cut sapphires, the step-cut fire opal clasp within a rose-cut diamond surround, earclips and double-clip brooch of similar design, mounted in gold, lengths: 17.0cm, earclips 4.3cm, brooch 7.6cm, fitted case by Goldsmith & Company.

Accompanied by a valuation for insurance from The Goldsmiths and Silversmiths Company, dated 16 September 1949.