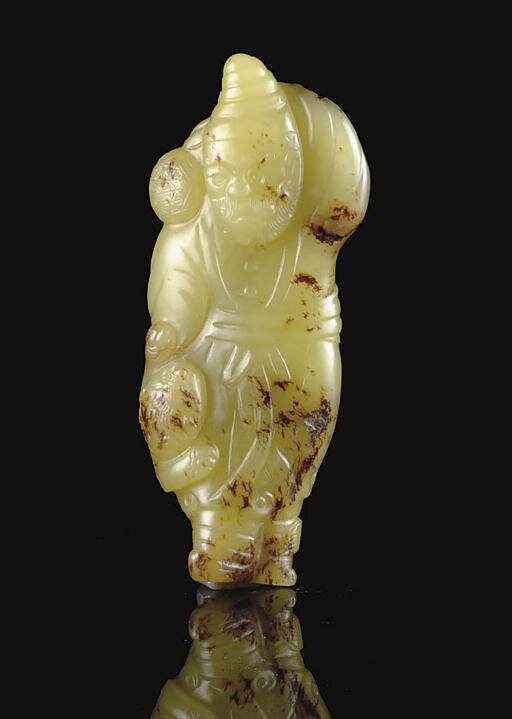 Well carved from a somewhat flatish pebble with a bearded foreigner wearing a conical hat and a long-sleeved tunic tied with a wide sash around the waist over a buttoned shirt, with his left arm bent behind his head as his holds a brocade ball to tease the young lion climbing up his right leg, the greenish-yellow stone with brown markings, box. In the form of two tubular pedestal cups carved around the sides with bands of archaistic designs above a band of lotus petals and made to look as if they partially rest atop the back of a recumbent beast, its head projecting at the bottom from one side as a support for a mythical bird standing with a ring suspended from its curved beak while its horns extend backwards onto the rim of the cups, on the reverse the beast's bifurcated tail supports a strap handle surmounted by an animal mask, the semi-translucent stone mottled throughout.

Note: Compare the similar double-tube vase dated Ming dynasty (16th-17th century) in the British Museum illustrated by J. Rawson, Chinese Jade from the Neolithic to the Qing, London, 1995, p. 387, fig. 5. The author relates this cup to a Han dynasty jade cup with cylindrical body on a pedestal foot (fig. 3), p. 386, and also to a gilt-bronze stand in the shape of a bird suspending a ring standing atop a remcumbent beast and flanked by two attached pedestal trays that most likely held tube-shaped cups (fig. 4), p. 387. The British Museum example is also illustrated in the catalogue of the O.C.S. exhibtion, The Arts of the Sung Dynasty, London, 16 June-23 July 1960, pl. 91, no. 276. Well carved in a recumbent position with head turned inquisitively to the side, with small floppy ears, long mane, pronounced backbone and tufted tail in three sections, the haunches outlined in flames, the pale greenish-gray stone with some opaque inclusions and russet coloring, box.