NEW YORK, NY.- Christie’s Asian Art Week live auctions totaled USD $41,641,250 (£33,752,998 / € 37,662,556 / HK$324,469,071) with online sales to continue through September 25. Deep bidding was witnessed for all categories with active participation from registered bidders spanning 36 countries and 5 continents. Exceptional results were achieved for the two collection sales, Masterpieces of Early Chinese Gold and Silver and Chinese Art from The Art Institute of Chicago, with many lots greatly exceeding their initial sale estimates. Throughout the week of sales eleven new world auction records were set.

The top lot of the week was a rare and important large parcel-gilt silver bowl, Tang dynasty, which realized $3,495,000 and set the world auction record for a Chinese silver work of art. Other notable results included a very rare gold ‘dragon’-handled cup, Yuan dynasty, that sold for $2,535,000 and set the auction record for a gold work of art from the Yuan dynasty; an important massive sancai-glazed pottery figure of a Fereghan horse, Tang dynasty, which realized $675,000; and a very rare and finely enameled famille rose mille fleurs lantern vase, Jiaqing iron-red six-character seal and mark of the period, that sold for $879,000. 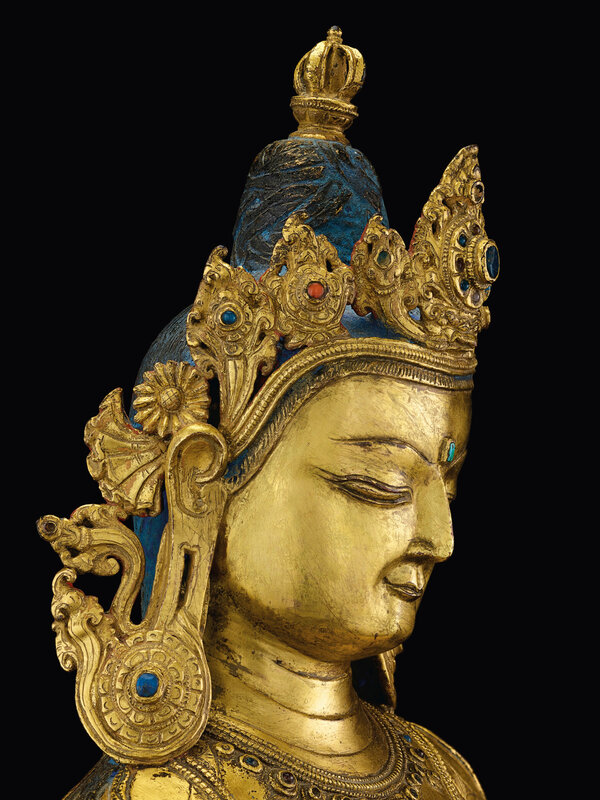 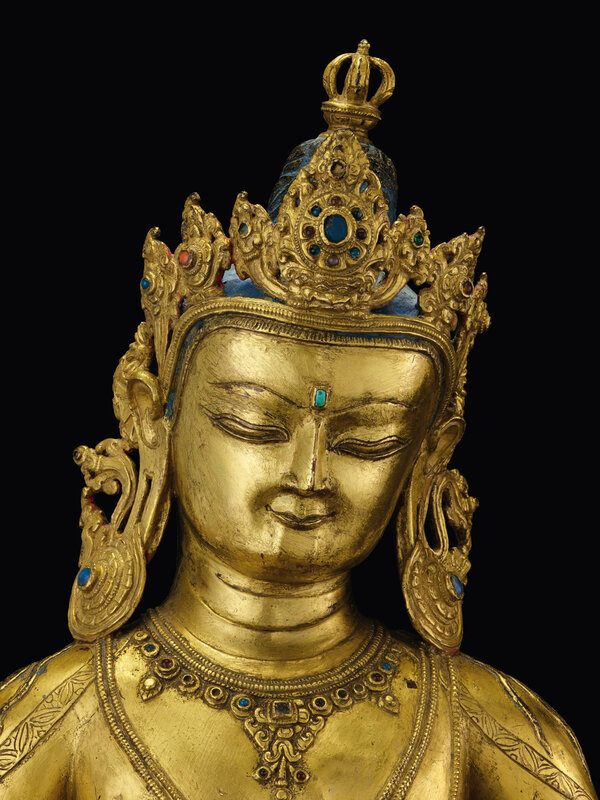 Provenance: Private European Collection.
Acquired by the present owner from the above, 23 November 1985.

Note: Peace and perfect equanimity radiate from this large and spectacularly elegant Tibetan sculpture of Vajrasattva. The ‘Vajra Being’ depicted here is a primordial buddha as well as a highly-accomplished bodhisattva, with a perfected understanding of ultimate truth. He is the personification of the primary symbol of The Lighting Path. This important Tibetan Buddhist deity is the primary and ceaseless source of Vajrayana teachings. He manifests in the sambhogakaya (Tib. long-ku) or celestial form or to assist in liberating all sentient beings from the undesirable cycle of rebirth in samsara. The mantra of Vajrasattva (known in Tibetan as Dorje Sempa) has the power to cleanse any sentient being of past transgressions. He holds a ghanta (Tib. drilbu) symbolizing the female aspect of wisdom and a vajra (Skt. dorje) symbolizing the male qualities of skillful means and compassion. Together, these aspects indicate Vajrasattva’s fully enlightened status.
The masterful artisans who crafted this sculpture made careful choices to convey the power, majesty and serenity of this invincible buddha. The flowing scarf, windblown flares behind his ears, and gently-lifted chest create a sense of movement in this strong figure. The surface of his sensitively modeled body is richly adorned with armbands, necklaces, and belts, all inlaid with jewels—the six ornaments representing the perfected qualities of the bodhisattva. While his proportions are otherworldly, his soft hands and feet give him a lifelike impression. The lost-wax process employed to create this sculpture ensures that this important commission is entirely unique.
This magnificent image of Vajrasattva is an exemplar of a mature Tibetan style inspired by Nepalese models. The figure’s sharp aquline nose, muscular upper body, cinched waist, and foliate-style ornamentation reveal the influence of a sculptural style established by the Newars, the indigenous inhabitants of the Kathmandu Valley. The Newar people were the progenitors of the most sophisticated forms of Nepalese material culture and, as such, their patrons were largely the royal and religious elite. Situated between India to the south and Tibet and China just beyond the Himalayan range to the north, the Kathmandu Valley holds a unique geographic position conducive to the proliferation of its artistic commodities. In Tibet, this artistry was highly sought after from the nascent years of Buddhism’s import to Tibet; sixteenth-century Tibetan historian and Kagyu lama, Pawo Tsuglag Trengwa, cites Newar artists as the source of metal artworks for Yarlung dynasty emperors of the sixth to eighth centuries. Later in history, the renowned Newar artist Anige erected a large torana for the Jokhang temple in Lhasa. Anige, who was appointed to head the imperially-sponsored Beijing atelier of Kublai Khan by his Tibetan Imperial Preceptor, Sakya hierarch Phakpa Lodro Gyeltsen (1235-1280) was, thereafter, credited with the development of the Nepalo-Chinese style of the Yuan period (1279-1368).
While the present figure exudes characteristics of Nepalese sculpture, the scale of the present lot as well as iconographic features such as the shawl covering both shoulders and the lack of a helmut-like crown associated with Newar Vajracharyas (to whom Vajrasattva is the root guru), identify this as a masterpiece made in Tibet. Both Vajrasattva’s crown and face help to identify the figure as a product of the fifteenth century. The crown in particular can be found in the Belri or Nepalese style painting tradition that flourished in Tibet, such as those within the 15th-century Gyantse Kumbum murals in Tsang Province (South Central Tibet). Wood and papier-mâché sculptures within Gyantse (as illustrated on Himalayan Art Resource, item. no. 6855) are remarkably similar to the present image of Vajrasattva.
The present figure’s face is nearly identical to that of Maitreya in a painting associated with Gyantse at the Rubin Museum of Art (see fig. 1). The distinct countenance seen here in three-dimensional form is defined by slightly-upturned, narrow, pursed lips and half-closed eyes that came to define a Tsang atelier in South-central Tibet, ostensibly active from the fifteenth century onward (see fig. 2). It remains possible, however, that the present sculpture was crafted by a Nepalese artist. Remarkable similarities to the face of a fourteenth-century gilt-bronze figure of Vajradhara at the Rubin Museum of Art, attributed to Nepal, evidence this possibility (see fig. 3), as do the many aforementioned qualities.
Himalayan Art Resources, item no. 24536.

Tina Zonars, Chairman of Asian Art, Christie’s, comments: “The results achieved by the week of sales demonstrate the importance of provenance, as seen with the exceptional prices-realized for works from The Art Institute of Chicago and early Chinese gold and silver formerly in the collection of Dr. Johan Carl Kempe. Throughout the week of sales, there was robust global participation across all buying channels with active bidding witnessed from Greater China. The overall success of the week of sales is a true testament to Christie’s successful teamwork and leadership across all areas of Asian art.”

Deepanjana Klein, International Head of Classical and Contemporary Indian and South Asian Art, remarks: “This season the sale for South Asian Modern + Contemporary Art performed with strong results demonstrating the growing international interest for the field. Our commitment to the category has been rewarded with the prices achieved, such as Sayed Haider Raza’s ‘La Terre,’ which realized over $3 million, new artist records, and an expanded global network of buyers. The top lots offered in the Indian, Himalayan, and Southeast Asian Art sale performed well showcasing the continued demand for masterpiece works for the category.”