Masterworks from the collections of Marylou Whitney and J.E. Safra lead Sotheby's auction

Masterworks from the collections of Marylou Whitney and J.E. Safra lead Sotheby's auction

NEW YORK, NY.- Sotheby’s will unveil highlights from the 19th Century European Art sale on 31 January in New York. Highlighted by a major group of paintings from the collection of J.E. Safra, the 95 paintings, drawings and sculpture on offer will open for public exhibition in Sotheby’s York Avenue galleries beginning 24 January, alongside Sotheby’s Masters Week auctions.

PAINTINGS FROM THE COLLECTION OF J.E. SAFRA
Highlighting the auction is a series of exceptional paintings from the extraordinary private collection of J.E. Safra. The group is led by August Strindberg’s masterpiece, Översvämning vid Donau (Flood on the Danube) (estimate $600/800,000), in which the ancient Danube river overtakes the shoreline at right and the trees at center, which rise above the tempestuous water. The present work is a stunning display of abstracted color and light, a central focus of the paintings from Strindberg’s Austrian period. Översvämning vid Donau was in the collection of the Museum of Cultural History in Lund for nearly sixty years, and since the mid-twentieth century has been widely exhibited in Sweden and across Europe. In 2005, it was included in the Tate Modern exhibition August Strindberg: Painter Photographer, Writer. 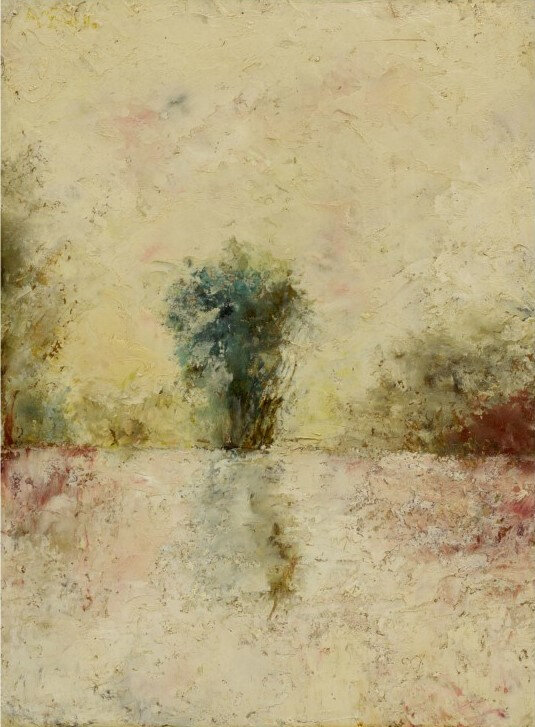 Additional works featured from the collection include Gustave Courbet’s La mer orageuse, a distinctive and symbolic canvas from the artist’s celebrated wave series, which inspired a generation of artists from Édouard Manet to Paul Cezanne (estimate $500/700,000); and Vilhelm Hammershøi’s Dunkebakke. Frederiksværk (Rolling Hills, Frederiksværk), in which the Danish artist employs the same sophisticated style of his renowned interiors – a neutral palette, careful manipulation of scale and subtle gradation of tone – to achieve a sense of seclusion and introspection in the greater world (estimate $300/500,000). An additional standout on offer from the Safra collection is Carl Larsson’s Verkstaden (The Workshop), a masterpiece depicting the artist’s wife and daughter in the charming workshop at Lilla Hyttnäs, the Larsson family home in rural Sundborn, Sweden (estimate $400/600,000). Painted in 1908, the domestic scene was created as part of a portfolio of twenty-eight watercolors for Larsson’s book, Åt solsidan, published in 1910. Sotheby’s will also be offering select works from the Safra collection in the Master Paintings Evening Sale on 29 January. Separate press release available.

A PORTRAIT OF ONE OF THE GREATEST RACEHORSES FROM
THE MARYLOU WHITNEY COLLECTION
The sale is further distinguished by two exceptional works by Sir Alfred J. Munnings from the collection of Mrs. Marylou Whitney, the prominent philanthropist, arts patron and thoroughbred breeder. Through her marriage to Cornelius Vanderbilt “Sonny” Whitney, Mrs. Whitney developed a lifelong passion for thoroughbred horse racing. Alongside her husband, the couple produced over 175 stakes winners on the C.V. Whitney farm in Lexington, Kentucky (now Gainesway Farm). Mr. Whitney served as a director of Churchill Downs, and, in Saratoga Springs, founded the National Museum of Racing and Hall of Fame and served as its first president.

After Sonny’s death in 1992, Marylou established her own eponymous stables, and enjoyed enormous success with Bird Town, who won the Kentucky Oaks in 2003, and Birdstone, who won the Belmont Stakes and the Travers Stakes in 2004. Her contributions to racing, especially in Saratoga, were recognized through membership in the Jockey Club (2011) and a place on the Saratoga Walk of Fame (2015). Shortly after her passing, she was inducted into the National Museum of Racing and Hall of Fame.

Their passion for horses was reflected in the fine art they owned, including Sir Alfred J. Munnings’ My Horse Anarchist (estimate $200/300,000) and Mahmoud Being Saddled for the Derby, 1936 (estimate in excess of $3.5 million). The latter was commissioned by Sir Sultan Mahomed Shah, Aga Khan III to commemorate his record 1936 Derby victory with the horse Mahmoud. The stables of the Aga Khan, a shrewd and celebrated racehorse breeder, were filled with some of the greatest racing horses of the twentieth century. In 1940, the Aga Khan accepted a bid from an American consortium, led by “Sonny” Whitney, for the purchase of Mahmoud. Upon his arrival to the Whitney’s Kentucky farm, Mahmoud became the star stallion and sired some of the most important lines in modern American racing. 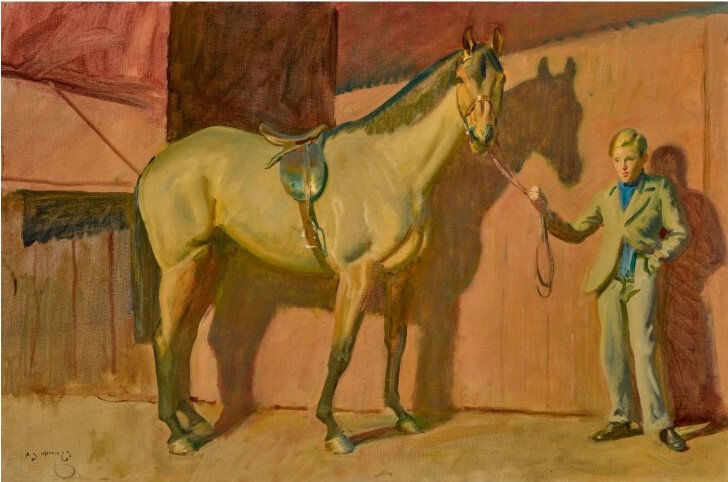 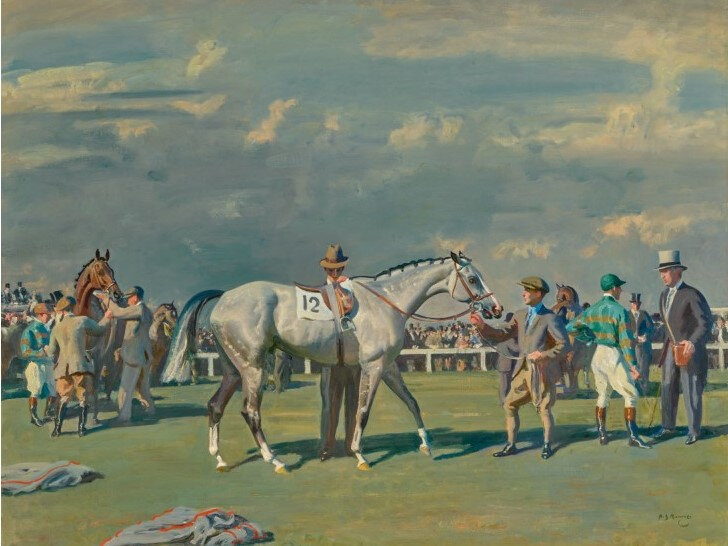 Sotheby’s sales of Property from the Collection of Marylou Whitney will continue through 2020, offered in our auctions of American Art, Magnificent Jewels, and Fine Jewels.

Further highlights include Property from the Estate of Marcel Lindenbaum, which features John Frederick Herring Sr.’s The London-to-Edinburgh Royal Mail Coach Racing Downhill and Mr. Wagstaff's The Saddler with Jockey and Trainer at Doncaster (estimate $100/150,000 and $150/250,000, respectively). 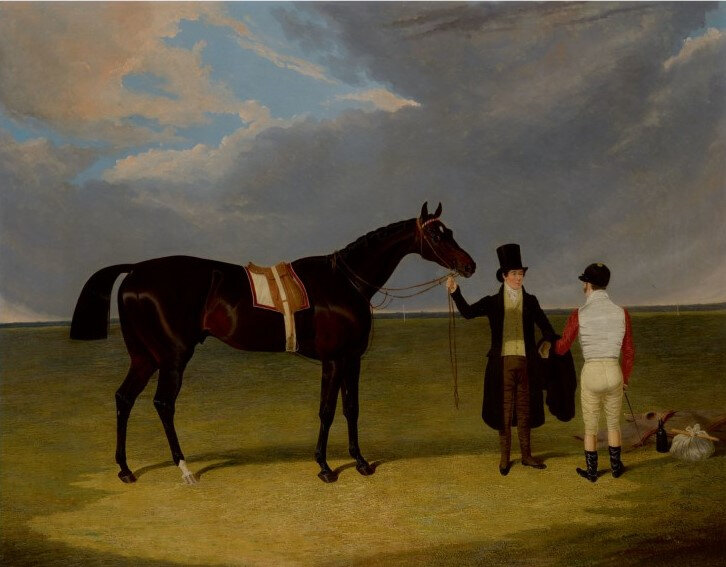 AN IMPORTANT RELIGIOUS WORK BY WILLIAM BOUGUEREAU
The sale also brings to light an important work by the master of French Academic painting, William Bouguereau, which has not been exhibited in public for over 40 years. Painted in 1903, Oro Pro Nobis depicts the Virgin Mary in a similar composition to those used by the Italian Renaissance masters Bouguereau deeply admired, such as Raphael, Andrea del Sarto, and Leonardo da Vinci (estimate $500/700,000). Throughout Bouguereau’s diverse religious works, the Virgin Mary was a predominant subject; in her, he found a comforting image of strength, serenity and forgiveness. Though set in an ideal realm, Ora Pro Nobis is informed by Bouguereau’s brilliant technique in recording detail and his commitment to the subject, combining the real and the theological, presenting sublime, spiritual beauty. Soon after its completion, Ora Pro Nobis was exhibited at the Royal Academy in 1904; sold a year later, this painting last appeared on the market in 1979. ORIENTALIST ART
Following last year’s record-breaking sale of Orientalist Art from the Najd Collection at Sotheby’s London, will offer a strong selection of Orientalist pictures, capturing the dynamic landscapes of the Arab, Ottoman, and Islamic worlds. The group is led by Jean-Léon Gérôme’s The Grand White Eunuch, depicting a scene from the hammam, or Eastern bath (estimate $120/180,000). A further group of Orientalist works from a Private Texas Collection, including Edwin Lord Weeks’ Departure for the Hunt (estimate $80/120,000) and Rudolf Ernst’s The Palace Guards (estimate $100/150,000) will also be offered. 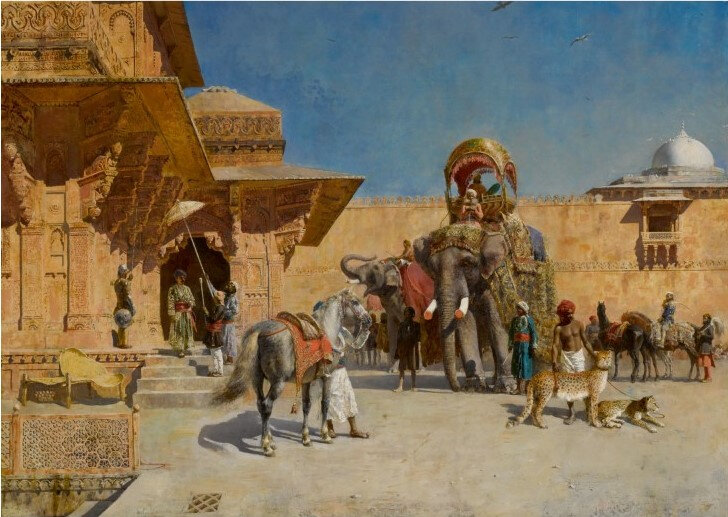 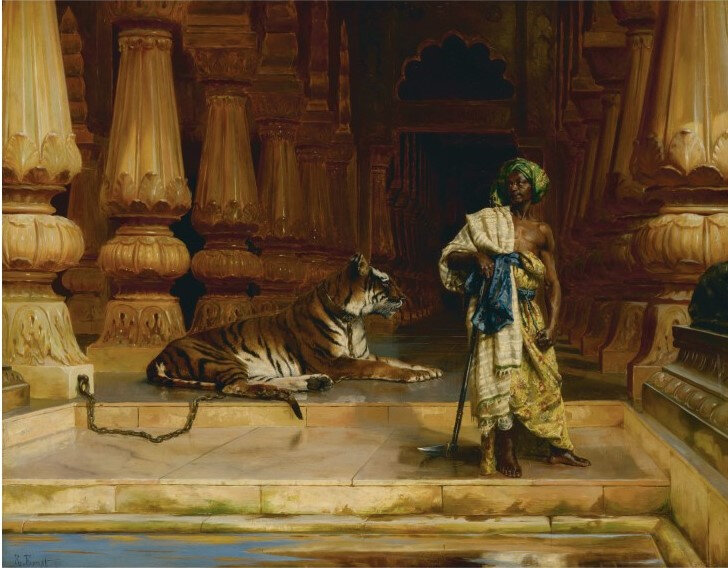 VICTORIAN AND BRITISH PAINTINGS
The January sale also features a wonderful array of Victorian and British paintings, led by John Atkinson Grimshaw’s A Yorkshire Home, a mysterious and melancholy composition of an English countryside manor (estimate $350/500,000). Grimshaw explored the theme of country roads and homes lit by November dusk and moonlight throughout the 1870s, a particularly prolific period for the artist.