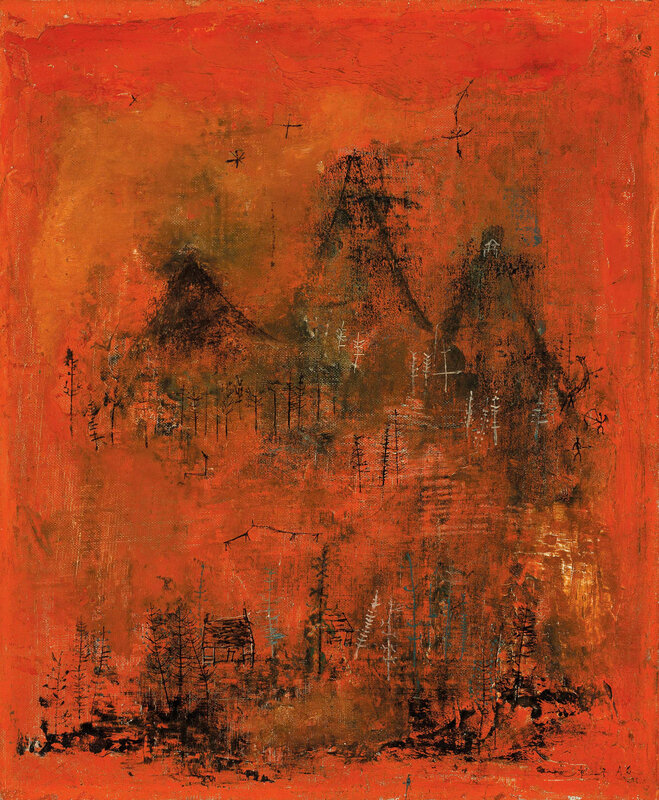 This work is accompanied with a certificate of authenticity signed by the artist on 19 January 1996.

Note: By contrast with the figurative landscapes Zao Wou-ki painted during his time at the Hangzhou Academy of Arts (Fig.1), those produced after his move to Paris in 1948 began to show a simpler and more refined use of color, with a more poetic and mature compositional sense (Fig. 2). In 22.03.50 (PAYSAGE ROUGE), dating from 1950, red, black, and green make up his principal color palette, along with traces of blue and white streaks where pigment has been scratched from the canvas, creating an overall feeling of depth and pure elegance. The composition is spacious and open. Its human figures, buildings, and forests have undergone simplification; echoing the sculpture of Giacometti, they exude the simple and primitive air of symbolic motifs cut with a chisel (Fig. 3).

In 22.03.50 (PAYSAGE ROUGE), Zao Wou-ki's black and green oil pigments mimic the effect of overlapping washes of heavy and light ink. Even given his simplicity in depicting this scene, we can still clearly distinguish the foreground and deep distance. Paysage exudes an appeal not unlike the cloudy, misty mountain landscapes of Mi Fu, and in particular, the three peaks towering high above the landscape recall Mi Fu's famous Mountains and Pines in Spring (Fig. 4). The rich red that serves as the base color for the mountain and forest scenery evokes a line from the Mu Fi poem: 'Light ink and autumn mountains, I paint the distant sky / the red light of sunset still shines, and mists are tinged with violet.' With a painterly vocabulary strongly influenced by traditional Chinese landscape painting, Zao Wou-ki here provides a fresh new interpretation of the conception of nature.

Zao Wou-ki once said he would prefer to abandon the word 'landscape' in favor of the word 'nature' to describe the subject of his paintings. In part this reflected his desire to distance himself from the restrictions of Chinese academic painting, and in part, reflects his search for 'the qi of life' found in the Chinese poetry and painting tradition. In his younger years he puzzled over these questions: How to convey in oils the breadth of the universe glimpsed in the landscapes of the Song Dynasty? How could he depict the deep meaning of the flow of the air, the drifting clouds and mist, and the wind and rain? And even more, how could he blaze a distinctive new artistic path? A close look at 22.03.50 (PAYSAGE ROUGE) reveals a clear distinction between Zao Wou-ki and post-war European art, as he still maintains a tenuous relationship with the Chinese academic painting style. But in color, brushwork, and spatial structure Paysage is highly experimental, as Zao Wou-ki was at this time striving to break through all the limitations that confined his art. It was precisely this attitude that enabled him to ascend the heights and ultimately become one of the era's Chinese masters of abstract art.

From the 1940s to the early 50s, landscape scenes (paysage) were a principal theme of Zao Wou-ki's painting. In them he gave special emphasis to lines and to brushstrokes, which he applied directly and without revision, thus making the creation of his paintings virtually a process of 'writing' (Figs. 5, 6). Zao's handling of branches in his forests has a unique, individual feel; his lines are organic, giving little regard to technique and seeming to appear instead as purely a response to his thought. They communicate a finely formed sense of motion, a feeling both lively and lifelike. This unsophisticated, appealingly ungainly, yet still soulful style, conceals a strong foundation in calligraphy. It is in fact deeply informed by the aesthetics of the Song Dynasty's Shang Yi style of calligraphy (Fig. 7), a style particularly concerned with self-expression. Zao's exploration of the language of line, as evidenced here, would lead him gradually toward an even purer form of abstract expression.

22.03.50 (PAYSAGE ROUGE) is especially distinctive in seeming to borrow Mi Fu's style of landscape composition, and in it, Zao Wou-ki daringly attempts to produce the special charm and strength of an ink work by building up layers of oils. His vermilion base color suggests the textures of lacquerware; at the same time, the thickness of his oils allows him, at some points, to replace line with streaks scored into the canvas. Possibly inspired by the etching of copper-plate prints, such lines also possess the distinctive rough beauty of carved Chinese-character inscriptions. A work such as 22.03.50 (PAYSAGE ROUGE) displays Zao Wou-ki's ability to translate his art from one particular medium or aesthetic to another, and from the spiritual to the physical, and has great significance as a bridge between important periods in his work.