The figure is shown seated on a cloth-covered seat in a pensive pose with the right leg crossed over the left knee, the head backed by a circular mandorla. The figure is raised on a rectangular platform, carved on the front with two leonine beasts flanking a figure supporting a censer, and on the reverse with a dedicatory inscription dated to the fourteenth day of the eleventh month, of the fourth year of Tianbao, corresponding to 553. Traces of painted figures, possibly a lady and officials, flank the inscription.

Note: A related white marble figure in the Palace Museum, Beijing, shown seated in a similar pose on a large rectangular block plinth, but of smaller size (16 ¼ in. high), is illustrated by Wan-go Weng and Yang Boda, The Palace Museum: Peking, Treasures of the Forbidden City, New York, 1982, p. 236, no. 131, where the figure is identified as Sakyamuni in meditation. The Palace figure, which is dated by inscription to 540, and the present figure both have long oval faces and slender waists, and have similar notched edges accenting the drapery on the shoulders. The Palace figure, however, holds in his right hand a lotus pod that rests against the halo behind the head, as do two ribbons that extend upwards from his headdress; the two ribbons of the headdress of the present figure, by contrast, fall gracefully behind the head and onto the shoulders. Another noteworthy difference is that the block plinth of the Palace figure is completely undecorated, while the plinth of the present figure is carved in relief with a pair of lions flanking a figure supporting a bud-shaped censer. A comparable depiction of two lions flanking a figure supporting a censer can be seen on the block plinth of a marble figure of seated pensive bodhisattva flanked by a pair of smaller, standing bodhisattvas. Illustrated by O. Sirén in Chinese Sculpture from the Fifth to the Fourteenth Century, vol. II, Bangkok, 1998 ed., pl. 244A, the figure is dated by inscription to 558. The face is carved with a serene expression below the finely detailed hair drawn up in a chignon. 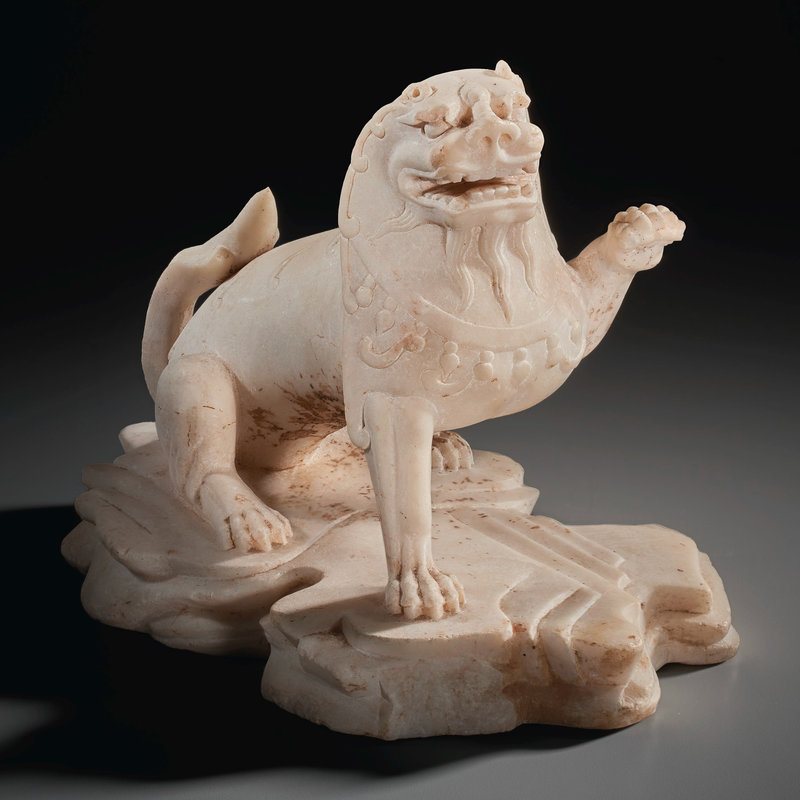 The figure is shown seated on a rocky base with the front left paw raised.