A rare celadon-glazed double-gourd vase and cover, Seal mark and period of Qianlong

A rare celadon-glazed double-gourd vase and cover, Seal mark and period of Qianlong 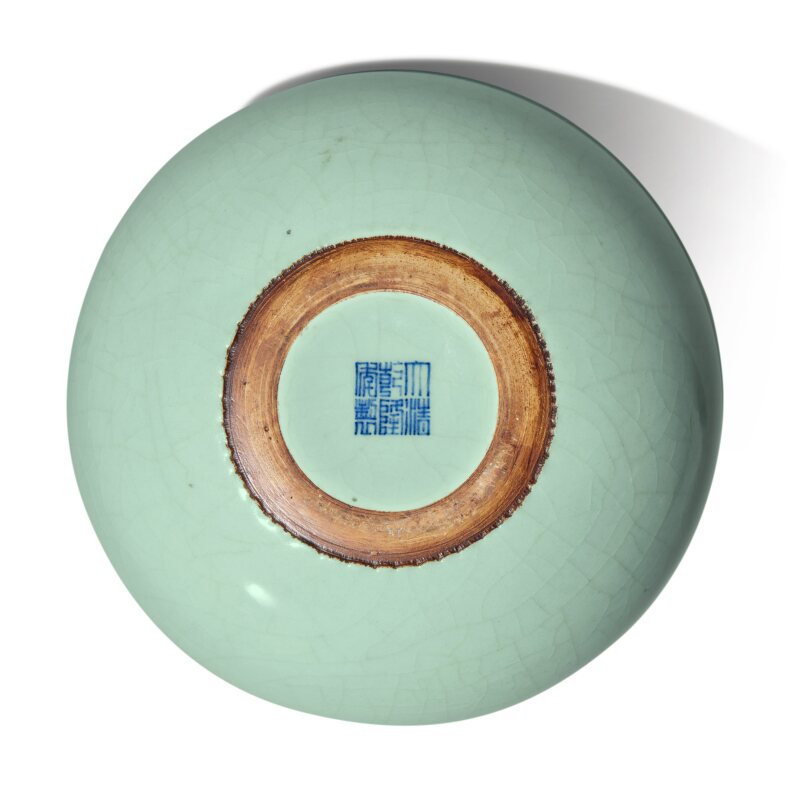 the base with a six-character seal mark in underglaze blue (2).

Note: Preserved with its small, original cover, this elegant vessel is one of the particularly delightful designs of lidded double-gourd vases that are very rare. Although vessels of double-gourd form were developed centuries before the Qianlong reign (1736-1795) – compare, for example, a Southern Song (1127-1279) guan prototype in the National Palace Museum, Taipei (accession no. zhong-ci-4737) – those with a matching stem-shaped cover, such as the present piece, appear to be an invention of the Qing dynasty (1644-1911). In China, the double-gourd is considered auspicious, its large number of seeds alluding to multiple offspring and a continuation of the family line. It was also an important symbol of Daoism, particularly associated with Li Tieguai, one of the Eight Immortals, who is often depicted with a double gourd at his waist containing the elixir of immortality.

Extant vessels of this type preserved with a matching cover are mostly held in museum collections. The National Palace Museum, Taipei, has a group of at least ten lidded double-gourd vases covered with celadon glaze (accession nos zhong-ci-334, 1544-1546 and 4606-4611), each bearing a six-character Qianlong mark and of similar size to the present piece. Three other closely related vases are in the Palace Museum, Beijing (accession nos gu-160473-4/32, 6/32 and 7/32). The Nanjing Museum also has an example, included in the exhibition Qing Imperial Porcelain of the Kangxi, Yongzheng and Qianlong Reigns, Art Gallery, The Chinese University of Hong Kong, Hong Kong, 1995, cat. no. 69.

Fraser Matthew Fell (1928-2020) was a prominent Toronto businessman and philanthropist. Among his many achievements, he served as Chairman of the World Gold Council and director of the Toronto General and Western Hospital Foundation. He was appointed as Member of the Order of Canada in 1995 for services to health care, education and the arts.