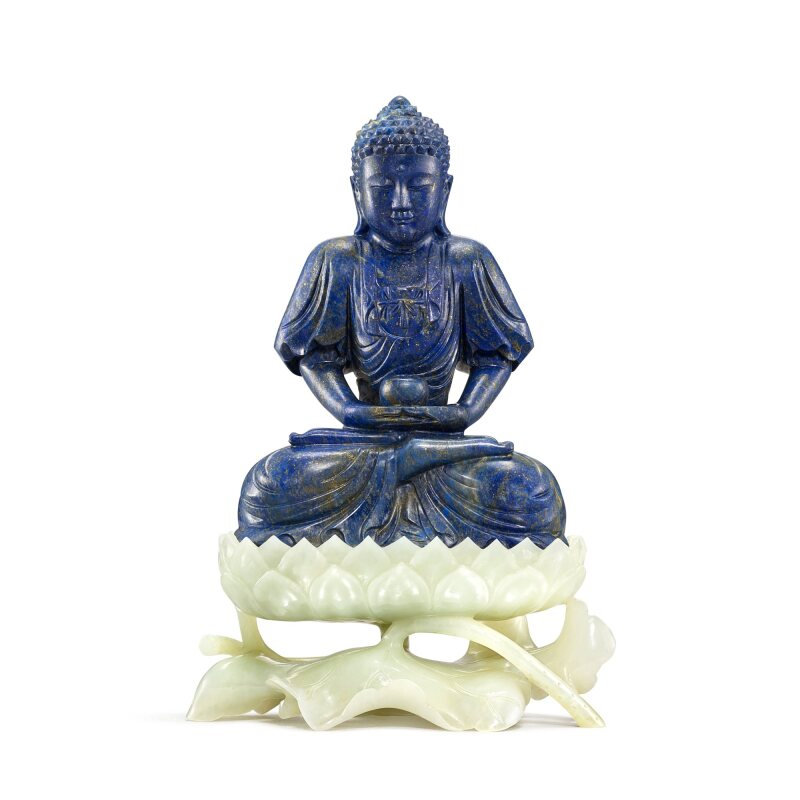 carved seated in dhyanasana with the hands in dhyana mudra and supporting an alms bowl, dressed in ample robes with voluminous sleeves and naturalistic folds, the serene meditative face beneath tightly curled hair, the stone of a rich blue colour accentuated with gold flecks, all supported on a white jade lotus base.

Note: As one of the Seven Treasures in Buddhism, the esteemed lapis lazuli stone is often regarded as a symbol of heaven, purity and rarity. It had been known under a myriad of names, for example, it was known as qiulin during the Warring States period (475-221 BC), meaning dazzling precious stones, and as qingjinshi during the Qing dynasty (1644–1911), translating to ‘blue-gold precious stones’. It was stipulated in the Collected Statutes of the Great Qing (Qing huidian tukao) that emperors would wear a lapis lazuli belt as part of their ritual attire during the imperial sacrifices to Heaven, as the brilliant indigo colour of lapis lazuli resembles that of Heaven.

Besides its association with the heavenly celestials, the precious lapis lazuli stone was reserved solely for use by the imperial court, partly because of its scarcity and local inaccessibility. Foreign to China’s mineral topography, lapis lazuli was mainly imported from Afghanistan, with the principal mines in the remote Badakshan region of northeast Afghanistan behind the Hindu Kush.

There is little doubt that lapis lazuli was highly prized during the Qianlong period, as evidenced by a small group of objects which were dyed to imitate the natural stone. This is exemplified by an 18th-century carved stone table screen dyed to mimic lapis lazuli, in the Asian Art Museum of San Francisco, published in Michael Knight et al., Later Chinese Jades, Ming Dynasty to Early Twentieth Century from the Asian Art Museum of San Francisco, San Francisco, 2007, pl. 102. The craftsmen even went to the length of inserting small bits of metal to mimic the natural pyrite patterns in the stone.

The present figure belongs to a small number of votive objects carved from lapis lazuli during the Qianlong period. See a related lapis lazuli figure of Bodhisattva enclosed in a gilt-bronze and turquoise-inlaid shrine in the Qing Summer Palace at Chengde, illustrated in Buddhist Art from Rehol: Tibetan Buddhist Images and Ritual Objects from the Qing Dynasty Summer Palace at Chengde, The Chang Foundation and Kaohsiung Museum of Fine Arts, Taipei and Kaohsiung, 1999, cat. no. 81; and another related figure in the Qing Court collection, embellished with pearls and semi-precious stones, illustrated in The Complete Collection of Treasures of the Palace Museum. Treasures of Imperial Court, Hong Kong, 2004, pl. 182. For examples sold at auctions, see a lapis lazuli figure of Amitayus, without a stand, sold in our New York rooms, 17th September 2014, lot 483; and another figure of a Buddha, from the collection of William Boyce Thompson, sold in our New York rooms, 20th March 2019, lot 547.