Note : The motto 'Espoier me comforte' is associated with both the Strangways and Tilney families. Philip Tilney of Shelley, Suffolk (1540/1-1601/2) had only one son, Charles Tilney (1561-1586) who was hanged, drawn and quartered for High Treason as a Member of the Babington Conspiracy. No sisters or children feature in the printed pedigree.
The motto appeared on the Standard of Sir Giles Strangways of Melbury, Dorset (1486-1546). His great-grandson, John Strangways of Melbury Dorset (d.1593), married Dorothy (d.1592), daughter of Sir John Thynne of Longleat. They had three sons, two of whom died without issue, and three daughters: Dorothy, Grace and Anne, and it has been suggested that the present miniature depicts the youngest of the three daughters, Anne. There is no record of the dates of birth of the sisters and no other daughters of Sir Giles Strangways and his wife Dorothy are noted on the Strangways pedigree recorded at the 1623 Heralds' Visitation of Dorset (College of Arms Ms: IC22/136-137). Grace's eldest son John Chamberlayne was born in 1608 or 1609 when the present sitter would have been aged twenty. The date of Grace's marriage to Edmund Chamerlayne of Maugersbury is not known, neither is her age. Had she married at the age of eighteen it is possible that Grace is the daughter depicted in the miniature, however it is more probable that Anne is the sitter. Anne married George Norton of Abbots Leigh, Somerset.
We are grateful to Thomas Woodcock and Janet Grant for their assistance in the Tilney Strangways research. 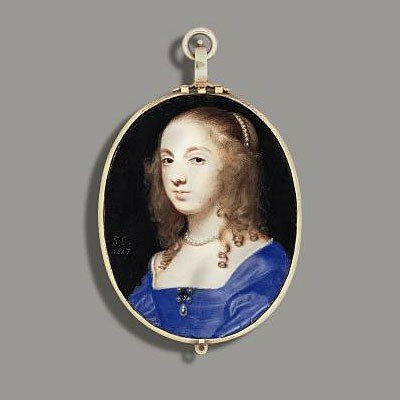 The present lot was purchased from Limner Antiques in 1973 and was the first miniature in the Gordon Collection. Note : William Courtenay (1768-1835), also known as William Beckford's young paramour, 'Kitty', succeeded his father as 3rd Viscount Courtenay in 1788. In the early 1780s he sat for his portrait for Romney, which had been commissioned by his admirer, William Beckford. Beckford was forced to embark on a decade of travel and social isolation on the Continent and is now known as a great collector and bibliophile. Viscount Courtenay fled to America in 1811 to escape his creditors, residing at the Claremont on the Hudson before purchasing the Château Dreveil in Paris in 1825-1826, where he lived in great style until his death. Twelve days before Lord Courtenay's death, the House of Lords revived in his favour the Earldom of Devon, which had been considered extinct for nearly three centuries.
A preparatory sketch by Augustin, inscribed in pencil 'Milord Courtenay', was in the Pierpont Morgan Collection, sold Christie's, London, 24-27 June 1935, lot 785. Another miniature of this sitter by Richard Cosway, R. A. was sold at Christie's, London, 10 December 2002, lot 120, and a further smaller example in the manner of Cosway of the present sitter was sold at Phillips, London, 6 July 1983, lot 219. See also Stephen Lloyd's exhibition catalogue Richard & Maria Cosway, Edinburgh, Scottish National Portrait Gallery, 1995, and London, National Portrait Gallery, 1995/1996, p. 122, no. 93, colour pl. 104.