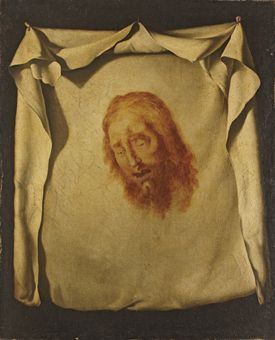 Provenance: Juan Pereira González, Madrid, by whom given to the father of the present owner, a spanish gentleman.

Notes: The apocryphal gospel of Nicodemus relates how, as Christ was on the Way to Calvary, Veronica came from her house and gave Him her veil to wipe His face, whereupon the image of His features became miraculously imprinted on it. The supposed cloth, or sudarium was preserved as a holy relic and became the object of worship from the tenth century in the Church of San Silvestro Rome (now in St. Peter's), and was said to possess miraculous properties. Veronica, whose name translates from the Greek as true icon - vera icon - has often been depicted in art holding out the sudarium for Christ; sometimes two angels hold up the holy cloth, or as here, it is just the cloth with the imprint of Christ's head which is represented, providing an object for meditation and devotion.

Gudiol illustrated the present picture in his 1976 volume on Francisco de Zurbarán and listed ten autograph versions of this popular subject. One Veil of St. Veronica, sold in these Rooms (17 December 1999, lot 5; Gudiol no. 557), is generally dated circa 1631, while the only signed and dated example, in the Museo Nacional de Escultura, Vallodolid, is dated 1658 (Gudiol no. 516), indicating that Zurbarán treated this subject throughout his career. The present canvas appears closest in composition and sentiment to the painting in the Museo de Bellas Artes in Bilbao, which is dated by Pérez Sánchez to around 1660-1, and similarly shows the head of Christ looking downwards with his mouth slightly open and his eyes downcast (Gudiol no. 55, and no. 98 in the catalogue of the exhibition, Zurbarán, Museo del Prado, Madrid, 1988). Professor Valdivieso dates this picture to the 1650s.

Maria Luisa Caturla has described this group of paintings showing the Veil of Saint Veronica as trompe l'oeil on a divine theme: 'Against the dark red or black background, the tactile values of a white cloth stand out boldly, the cloth being caught up in complicated folds, as if to frame the Divine Face. The folds are held in place by old-fashioned pins, with the gilt heads made separately. These pins are stuck ... into the outer world...Little cords come down diagonally from the two upper corners of the picture and hold the cloth at two points. Zurbarán's Veil of St. Veronica is hung from these fine cords, tied to something we cannot see since it is outside the picture: nails, no doubt, from which the cords descend to secure the bunched cloth... in a later, more classical version [like the present canvas] he eliminates this bunching at the top of the cloth and the big pin that pulled the lower part up to the middle...' (see M. Luisa Caturla, 'La Santa Faz de Zurbarán trompe l'oeil a lo divino' in Goya, nos. 64-5, 1965, pp. 202-5). Like Zurbarán's Crucifixions, the blackness of the background is a foil for either the white silhouette of the crucified figure, or the sudarium, thus accentuating the sculptural appearance aimed at by the artist and his patrons. As Gállego notes on the subject (op. cit., pp. 51 and 58), the deeply folded white cloth and the motif of the pin recalls one of Zurbarán's finest works, St. Serapion, in which a cartellino is pinned to the wall bearing the martyr's name (The Wadsworth Atheneum, Hartford).

The present work perfectly epitomises Claudie Resort's apt summary of his oeuvre: 'Zurbarán always maintained his taste for full, simple and monumental forms, a desire to express the inner life of objects and the beauty of texture, as well as an ability to integrate powerful contours and sculptural forms into a simple geometric format. It is for these qualities that his art profoundly moves modern sensibilities' (C. Ressort, in The Dictionary of Art , ed. by J. Turner, London 1996, 33, p. 733).

We are grateful to Professor Enrique Valdivieso and Odile Delenda for confirming the attribution on inspection of the original and on the basis of a photograph respectively.

Another paintings from Zurbaran about The Veil of Saint Veronica Another paintings about The Veil of Saint Veronica 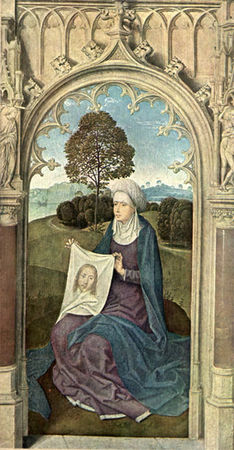