PITTSBURGH, PA.- The Frick Art & Historical Center presents The Dutch Italianates: Seventeenth-Century Masterpieces from Dulwich Picture Gallery, London featuring 39 paintings by 17 masters of the Dutch Italianate style from the collection of Dulwich Picture Gallery, London, called the best small museum in all of Europe. The exhibition, which opens on July 11, 2009, will be on view at The Frick Art Museum through September 20, 2009.

Italy has always exerted a powerful influence on artists, and during the seventeenth century many Dutch artists—some who visited Italy and others who did not—infused their landscapes with the feel of the Roman campagna or countryside. The paintings they created exhibit glorious tonal control, magical handling of light, technical brilliance, and humor. The exhibition highlights the famed masters of the Dutch Italianate style, including masterpieces by Aelbert Cuyp (1620–1691), Adam Pynacker (1620/1–1673), Jan Both (c. 1615–1652), Nicolaes Berchem (1620–1683), Karel Du Jardin (1621/2–1678), and Philips Wouwermans (1619–1668). The works—some tiny, some grand—include a variety of styles within the landscape genre: anecdotal scenes, humor and allegory, as well as paintings of hunts and outdoor entertainments that anticipate the light-hearted subjects of the Rococo period.

The Dulwich collection was originally formed for the king of Poland by London art dealers Noel Desenfans and his partner, painter Sir Francis Bourgeois RA. At the time the collection was being formed in the 1790s, the Dutch Italianates and their works were at the height of popularity and value. However, when Catherine the Great and the King of Prussia partitioned Poland in 1795, Desenfans and Bourgeois were left with 180 paintings for which no payments had been made. In spite of this setback, they continued to build the collection, and upon Bourgeois’ death in 1811 it was left to Dulwich College. This extraordinary gift and his wish to make the works available to the public, made the Dulwich Picture Gallery England’s first public art gallery.

During the seventeenth century, artists from all over Europe flocked to Rome to work alongside their Italian colleagues. Perhaps the most remarkable and prolific artistic invasion of Italy in this period was that of the Dutch. Middle-class Protestant Dutch art patrons were more interested in collecting bucolic landscape scenes rather than religious works. To accommodate them, the artists turned to the Italian campagna for their subject matter. Painters such as Jan Both and Nicolaes Berchem brought back seductive visions of mountains and peasants basking under golden skies to a flat and cloudy Holland that could not get enough of them.

The Dutch artists in Rome worked and lived together. Known as a rowdy and fun loving bunch—they could be seen marching together into the countryside to sketch. What made their work different from other landscapists of the time, are the kinds of people who inhabited their luminous paintings. Poor peasants, especially milkmaids and shepherds, and street people, including beggars, prostitutes and traveling musicians, cavorted among classical ruins. The Italians were scandalized, but these subjects were highly marketable back in Holland. The number of Dutch artists who imitated this style and subject matter—but who never visited Italy—bears this out.

Their popular visions of Italy inspired Cuyp, Wijnants, Wouwermans, and Weenix to create their own interpretation of a landscape they may never have seen. Included in the exhibition is one of Aelbert Cuyp’s most accomplished works, Herdsman with Cattle, c. 1645. The painting is one of six by Cuyp in the exhibition. Aelbert Cuyp, one of the most famous of the Italianate artists, never actually visited Italy, and probably learned his own mastery of light effects from Jan Both. Jan Both traveled to Italy in 1637, where he met and worked with the French landscapist Claude Lorrain, from whom he acquired the skill of rendering effects of golden or silvery light. His technique was hugely influential after he returned to Holland in 1642. Cuyp’s paintings can be seen in comparison to Both’s work, whose charming, richly colored Road by the Edge of the Lake is also in the exhibition.

One of the key artists of the first phase of Dutch Italianate painting, Cornelis van Poelenburch (1594/5–1667) produced luminous views of the campagna, often populated by figures from Classical mythology. His Valley with Ruins and Figures, 1627, is a carefully composed work in the classical style.

Probably the most successful and prolific of all the Italianate landscapists was Nicholas Berchem, who combined a fluid technique with a figural style that was very influential. He traveled to Italy in the 1650s, and his popular landscapes presented colorful Italian peasants in landscapes littered with Classical ruins.

Philips Wouwermans’ Halt of the Hunting Party from the early 1660s, is a clear illustration of the connection of fanciful Dutch landscapes to the later French Rococo style. In this canvas, a well-dressed hunting party stops at stream and is theatrically posed along a winding, rugged path, their fancy dress and prancing horses provide a choreographed contrast to a lowly beggar offering his cap for alms in the background. Cuyp and Wouwermans are two of the most important Dutch Italianates who never traveled to Italy, but were influenced by the work of their peers who made the journey.

Although these artists were influential throughout Europe until the end of the 1700s, by the 1830s the tide of pubic taste had turned against the Dutch painters of Italian landscapes. England’s great landscape artist, John Constable, spoke out against the artificiality of the Dutch Italianate style. Trends shifted again, however, by the time Henry Clay Frick formed his collection in New York, and several works by Aelbert Cuyp and Phillip Wouwermans are included in The Frick Collection in New York.

Selected from the collection of The Dulwich Picture Gallery, England’s oldest public art gallery, these paintings are on a limited North American tour while the Dulwich is undergoing renovation. Adam Pynacker, Landscape with Sportsmen and Game, 1811. Courtesy of the Dulwich Picture Gallery 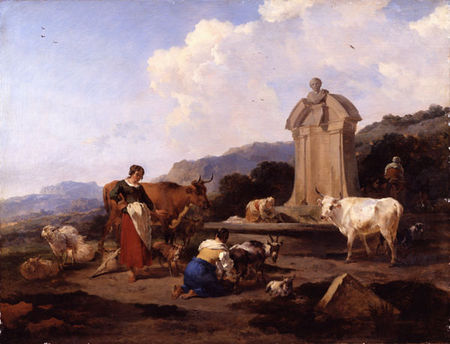