The treatment of both the dragon and the background of this silk tapestry is typical of Central Asia, where motifs enjoyed great longevity and creative recombination. The form of the dragon, with a long snout and its tail hooked behind its leg, represents a Tang-dynasty convention that survived in Central Asia until at least the Yuan dynasty.

Placing a dragon on flowers is most likely a Central Asian invention; the brilliant colors and vitality of the animals are also characteristic of the tapestries of the region, which were probably produced by Uighurs, who were known for their splendid tapestry-woven clothing.

The Mongols had at their command various textile traditions from throughout their vast empire—gold motifs on a solid background from northern China, vibrant and colorful designs from Central Asia, elegant monochromes from southern China, and overall patterns in gold from Western and Central Asia. The Mongols especially favored the latter, called nasij.

Nasij usually was made in lampas, a weave unknown in China. Early in the Mongol conquest, between 1219 and 1222, the Mongols moved thousands of weavers from the western to the eastern part of their growing empire. They set up workshops for the manufacture of nasij where artisans from various parts of Asia worked together, resulting in the rapid dissemination and modification of textile technology. In the early 1270s under Khubilai Khan, the workshops were moved and consolidated in the capital of Dadu.

Open trade under the Mongols changed textile history, enhancing designs in both the east and the west. For instance, revitalized motifs returned from Central Asia to China, and the vivid patterns of Central Asian textiles that reached Europe clearly inspired Italian textile designs of the fourteenth and fifteenth centuries.

Nasij, a silk textile woven with a preponderance of gold on the surface, was especially significant to the Mongols and was used for men's garments and the collars and cuffs of the robes of noblewomen. The nasij neckbands depicted in the portrait of Chabi, consort to Khubilai Khan (see Portraits of Empresses), bear a pattern very similar to the falcons on this textile. 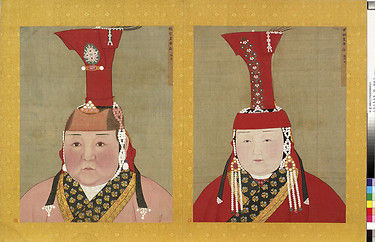 The portrait on the right is that of Chabi, consort to Khubilai Khan. She was a remarkably capable woman who was one of her husband's chief advisers. She was also deeply religious and was said to have persuaded Khubilai to convert to Tibetan Buddhism. The portrait on the left is that of Targi, wife of the Prince Darmabala (1264–1292), a grandson of Khubilai. She became empress dowager when her son, Qaishan (r. 1308–11), succeeded his uncle as emperor of the Yuan dynasty.

The nasij neckbands depicted in the portrait of Chabi bear a pattern very similar to that of a textile (above) on view in the exhibition.

This magnificent cloth of gold is a representative product of the finest Mongol imperial workshops. Such textiles, used by the emperor and his court, were also sent as imperial gifts. Judging by its design, this textile was woven in a city such as Beshbaliq, where artisans from northern China and the eastern Iranian world who were relocated there by the Mongols worked alongside local craftsmen. While the paired lions and griffins are eastern Iranian motifs, the decorative cloud elements of the lions' wings and background vines derive from Chinese models. The result is a uniquely Central Asian design. Central Asian silks with small dense patterns in gold were part of the international trade that flourished under the Mongols, and most known examples survive in European church treasuries. This piece was part of a liturgical vestment long associated with Pope Benedict XI (died 1304). Textiles such as these were also depicted in Italian—particularly Sienese—paintings, for example Simone Martini's Annunciation of 1333 (Uffizi Gallery; see image below). 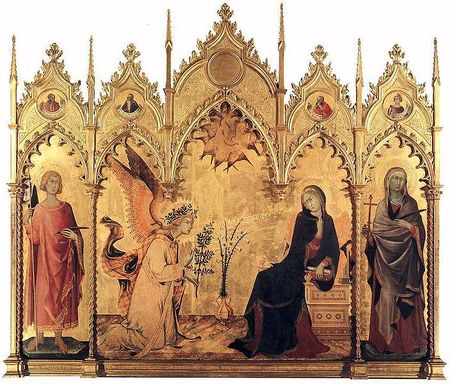 This textile demonstrates the longevity of motifs in eastern Central Asia. The placement of animals—a spotted horse, a rabbit, and two deer (or antelope)—at its cardinal points is a compositional device that began to appear in the region during the Han dynasty. The birds on the piece, especially the parrot, entered the Central Asian repertoire during a second period of strong Chinese influence, the Tang dynasty (618–906). The floral background's central motif of lotus blossoms, a lotus leaf, and a trefoil leaf was seen in Central Asia and North China but became widespread during the Yuan dynasty.

The central design of this embroidered canopy strongly resembles a relief carving from a Daoist temple (founded 1316) in the Yuan capital of Dadu. Showing the revitalizing influence of Central Asia, these powerful phoenixes, in an innovative Yuan-dynasty pairing, are in stark contrast to the gentle birds of the Song period. At the corners of the canopy, vases bearing floral scrolls evoke a pattern that originated in India and was transmitted to China via Nepal and Tibet. The canopy's workmanship is exquisite: extremely delicate floral embroidery in silk contrasts with the nearly sculptural birds and vases couched in thick gold threads. The theme of waterfowl amid leaves is common in thirteenth-century silk tapestries of North and Central Asia. A piece similar to the example seen here was found in the burial pagoda in Beijing of the Buddhist monk Haiyun (1203–1257), an important figure at the court of the early Mongol Empire. The rhythmic background of leaves and flowers also recalls the densely patterned Central Asian silks woven with gold that are preserved in European church treasuries; see Textile with Floral Pattern (above), for example. Few silks better represent the imagination and vitality of Central Asian textiles of the Mongol period than this piece, with its angry birds and strange, incomplete winged beasts against an airy floral background. Other Central Asian textiles of this type survive in European church treasuries and show dynamic interactions among the various imaginary creatures of their patterns. Such designs had a strong effect on fourteenth- to fifteenth-century Italian silks, which are known for their energy and humor. 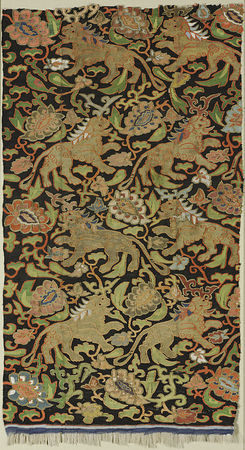 The depiction of lions with parted manes and tilted heads dates from the Sasanian dynasty of Iran (224–651), but palmettes bearing the motif are common to both the Iranian world and Central Asia. Tapestry weaving permits complete freedom of design; nevertheless, this textile's pattern repeats both horizontally and vertically—typical not of tapestries but of silks made on a drawloom (a loom with a pattern mechanism). The Iranian influence on the pattern and the similarity of its layout to that of drawloom silks suggest that this type of silk tapestry may have originated in the early thirteenth century, at a time of massive migrations of artisans from the eastern Iranian world to eastern Central Asia. 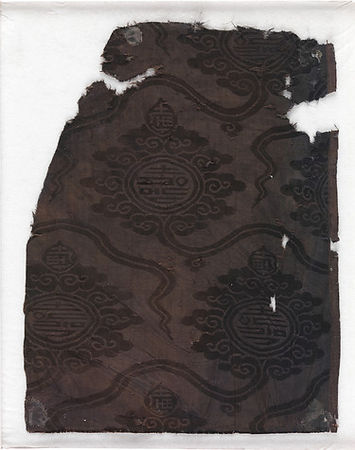 Trade or diplomacy must have played a role in the life of textiles such as this example (now darkened but originally blue), which, according to records, was found in Egypt. The palmette pattern originated in Central Asia and the eastern Iranian world. Here, it also features a Chinese cloud border and flawlessly rendered versions of the Chinese character for "longevity" (shou) in the center of and atop each one. Longevity damasks like this piece must have been present in other regions, too, as they probably inspired the designs of some of the rare surviving late thirteenth- to early fourteenth-century carpets of Konya, Turkey. This textile represents the tradition of northern China's Jin dynasty, which was known for textiles brocaded in gold with offset asymmetrical motifs on a solid-colored background. The motif here is a coiled dragon with a flaming jewel.

The coiled dragon, as a pattern for princes' robes, dates from the Tang dynasty and was also used for garments in the Song and Xixia dynasties. This example is an early instance of a dragon with five claws. It is woven in a variant of the brocading technique first seen in a Jin-dynasty princely tomb of 1162. Within each teardrop-shaped pattern on this textile is a hunting scene: a small fierce falcon at the top dives for a swan (or wild goose) amid flowers at the bottom. The spring hunt for swans was an annual event for the Mongols, and for the Jin and Liao dynasties before them. Similar imagery of falcons and swans appears on jade ornaments of the Jin and Yuan dynasties.

This piece, like the coiled dragon textile, was woven in the variant of the brocading technique first seen in textiles from a Jin-dynasty tomb of 1162. The tradition of brocaded textiles of northern China continued after the Mongol conquest. However, the arrival of artisans from the eastern Iranian world affected their design and structure: here, the pattern is symmetrical, and paired warps have replaced single warps. At the same time, however, the Jin-dynasty variant of the brocading technique continued. Textiles with all these traits may have been woven in Hongzhou (Hebei Province), where weavers from Western Asia and the former Jin capital are known to have worked together. This textile is one of very few northern Chinese silk-and-gold textiles to have survived from the Yuan dynasty. The dragons chasing pearls, the phoenixes, and the background of tiny hexagons are Chinese motifs, but the lobed roundels enclosing the dragons and phoenixes indicate the influence of eastern Iranian artisans who had been relocated to northern China. A red-and-gold silk woven with the same pattern and used for a collar is preserved in the Palace Museum, Beijing. The extraordinary survival of the two silks demonstrates that patterns were typically used over and over. This carpet is a spectacular demonstration of the impact of Islamic art on the arts of the Yuan. The plum tree branch of the field is of purely Chinese origin and is combined here with a pseudo-Kufic border. The dating of the rug is secure on the basis of stylistic considerations and by carbon-14 testing of a similar piece in a private collection.