WASHINGTON, DC.- The Smithsonian's Freer Gallery of Art and Arthur M. Sackler Gallery will launch a digital catalog, "Jades for Life and Death," from its extensive collection of one of the finest holdings of Chinese jades in the world Oct. 6. The first release, in a series of five volumes, will include more than 250 outstanding jades produced during the Chinese Stone Age (ca. 5000-1700 B.C.) drawn from the Freer and Sackler's collections, ranging from the Chinese Stone Age to the end of the Han dynasty (206 B.C.-220 A.D.). The online publication will be bilingual and incorporate research from the fields of art history, archaeology, geology and materials science, and take advantage of the rapidly evolving understanding of ancient China.

The jades included in the first release are searchable through customizable filter options that combine typological, historical, cultural, material and geographical details. The primary contents are jewelry and ceremonial objects such as ritual disks (bi) and tubes (cong), as well as symbolic tools that were found close to the body in tombs. The majority of the works were produced by the Neolithic Liangzhu culture (ca. 3300-2250 B.C.), which is now recognized as the most prolific and advanced center for jade production in ancient China. Despite the significance of these objects, they have never been featured in a catalog such as those created for other major jade collections in China and the West.

Chinese archaeological discoveries continue to underscore the importance of the Freer and Sackler's works. The pace of research internationally amplifies the need for a scholarly catalog that is both interdisciplinary and digital. This digital catalog allows for immediate revision and expansion as new archeological sites and jade objects are discovered; new scholarly resources can also be added relatively easily.

"A digital platform like this facilitates easier communication with our archaeological colleagues working in China," said Keith Wilson, the Freer and Sackler specialist who conceived this online publication. "The hope is that Chinese archaeologists will help us understand our objects, which were acquired in the early 20th century without a clear record of their original burial context."

Given the size of the collection and the amount of scholarship and archival material that will be shared, "Jades for Life and Death" will be produced serially. Each of the anticipated five volumes is composed of five units:

• People will offer biographical information on previous owners, dealers and researchers who significantly contributed to the museum's knowledge of early jades (currently under development); in the future, practicing archaeologists in the field will be added

• Resources aiding research include Freer and Sackler archival materials, relevant past publications available in their entirety, a comprehensive bibliography, and links to on-line assets like the Google Cultural Institute

The 250 detailed entries in the first volume are joined by four essays on the history of the collection, scientific studies and a survey of archaeological work on the Neolithic Liangzhu culture in China by its leading excavator. Each entry also includes links to related objects in the Freer and Sackler collection and elsewhere as well as associated documentation such as purchase records and other archival materials. This digital approach offers numerous advantages, including an almost limitless capacity for images and content that ranges from historiographic to archaeological.

The next volume in this series, scheduled for release in fall 2017, is dedicated to jades of the early Bronze Age, chiefly the Shang dynasty (ca. 1600-1050 B.C.). "Jades for Life and Death" has been generously supported by the E. Rhodes and Leona B. Carpenter Foundation. Additional funding has been provided by the Leon Levy Foundation. 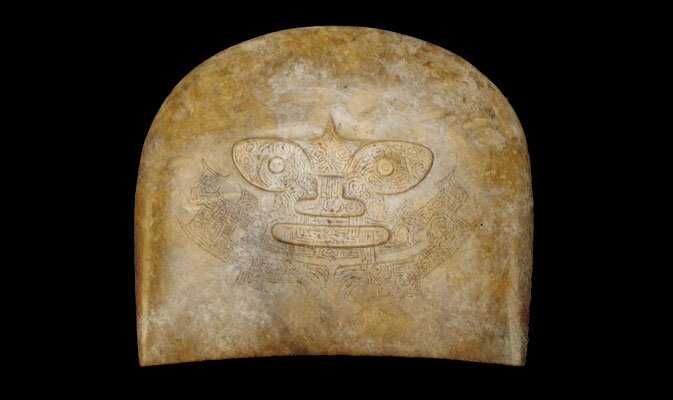 Since the earliest of times, jade was treasured as a material of status in China. This rare and beautifully colored stone was transformed into bracelets, pendants, head ornaments, and other forms of jewelry. Some of the examples found in Liangzhu culture tombs must have played a ritual function, for many pieces bear a mask motif that is also commonly found on objects surely created for burial rites. Craftsmen meticulously ground away the surface surrounding the masks to emphasize the large eyes and oblong mouth in relief.

Discovered only in the richest of Liangzhu tombs, such decorated jade plaques were probably attached to headdresses. The pairs of holes on the back allowed them to be sewn to cloth turbans worn by the deceased. Previous owners cleaned and repeatedly handled these jades, which were possibly unearthed centuries ago, and over time the fine surface details were obscured and the color and translucency of the natural stone dulled. 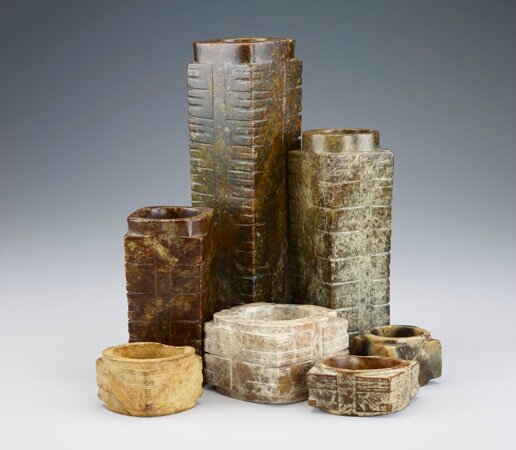 Museum founder Charles Lang Freer acquired these cong largely for their aesthetic appeal: he simply liked the way they look. Freer was attracted to their intriguing shapes, smooth surfaces, and mottled colors. A century ago, when these congappeared on the international art market, little was known about their historical, cultural, or archaeological significance. Today these mysterious tubes are recognized as being among the most important products from the Liangzhu culture outside China.

These jade cong tubes are considered an innovation of the Liangzhu culture. Cong come in a great variety of sizes and are frequently found in Liangzhu tombs, sometimes arranged in a circle around the body. Their original meaning and function remain unknown. Many of the earliest and most carefully finished examples (the result of months of laborious shaping by hand) are comparatively compact; their rounded shapes suggest the form evolved from bracelets. Some of them have a haunting mask design—with its bar-shaped mouth, raised oval eyes, sunken round pupils, and two bands that might indicate a headdress—that resembles the motif seen on Liangzhu jewelry.

Much larger cong, which are frequently made of lower-quality nephrite, emphasize impressive scale over meticulous workmanship. They have flatter sides, sharply angled corners, and squared collars at top and bottom—all indications that less time and attention were paid in shaping a rectangular block of jade. Simplified mask motifs on these cong would have been easier to produce as well. Such shifts might be associated with changing attitudes towards ritual objects that were intended for burial.

The cong form continued in use long after the Liangzhu culture flourished, but later Neolithic and Bronze Age examples are typically smaller and undecorated, suggesting their diminished importance in burial rituals. 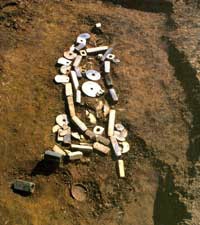 Although the circular shape of these bi resemble earlier jade pendants, their sheer size and weight make them impossible to wear. Such disks most likely held a ritual significance since thousands of them have been found at Liangzhu burial sites. The ones fashioned from finer jade and smoothed to a lustrous polish were typically placed nearest the deceased's body, while those of lesser-quality stone and with unfinished surfaces were often arranged in short stacks below the feet.Cong were sometimes arranged in a circle around the body, and ceremonial axes made of jade were interred with the deceased.

The finest Liangzhu bi (pronounced bee) were crafted from dark, even-grained nephrite. They were meticulously shaped with a circular edge and a central hole, signs of great patience and skilled workmanship. Perhaps more interesting are the imperfectly shaped disks. Some still retain evidence of the jade boulder's rough edges. Others preserve traces of tool marks, such as the shallow cuts that resulted from string saws methodically rubbing back and forth across the flat stone surface thousands of years ago.

This monumental blade is one of the largest ancient Chinese jades in the world. Although it is too large and heavy to be of practical use in harvesting crops, its shape is loosely based on much smaller stone harvesting knives that would have been fastened to wooden handles. Made for display, this ceremonial version has an abstract geometric form with a line of precisely spaced holes that probably served no practical purpose but were copied from humble stone knifes to enhance the design. The broad expanse of mottled colors and the exceptionally thin "cutting" edge make this a remarkable demonstration of the craftsman's skill in working with jade.

Despite its current impressive size, this blade was once much larger. At on time, both the left and right edges looked identical. Judging from the way the broken blade was refinished, the uneven serrated edge at the lower right is not original. Based upon the style of the human face shown in profile upside down at the right end of the blade, it broke shortly after it was first created in the late Neolithic period. This face, so different from the earlier mask motifs on Liangzhu jewelry and cong, can be traced to the Longshan culture that occupied northern sites from Shandong to Shaanxi. Other changes to the surface, such as a long inscription and outline drawings, are more recent additions. In 1928 a severe rainstorm caused the ground to collapse in the town of Jincun in central Henan province. Locals exploring the sinkhole discovered a royal tomb richly furnished with jades and bronze vessels. Keen interest on the international art market ignited a search for more tombs, and eight large burials were quickly found in the area. The tombs, now linked to rulers of the late Zhou dynasty (509–314 BCE), contained some of the most exquisite objects made by Chinese craftsmen during the late Bronze Age.

When the Freer Gallery of Art acquired this assemblage in 1930, shortly after the discoveries at Jincun, these four pendants and six cylindrical beads were attached to the linked gold chain as shown. Recent scientific study confirms both the jade and the chain are genuine to the period, but they might not have been together in ancient times.

To fashion these ornate pendants, Jincun craftsmen used relatively sophisticated metal tools to cut, drill, facet, and polish thin slices of beige nephrite. Patience and skill produced the dramatic contours, textured surfaces, and intricate openwork details that are an amazing aesthetic and technical advancement over the largely unadorned disks of the Neolithic period.