MADRID.- The Museo del Prado is showing a group of eight works painted between 1842 and 1855 which have been selected from the numerous portraits of children in its collection dating from the reign of Isabel II with the aim of emphasising two of the most important centres for Romantic art in Spain: Madrid and Seville. The display of this selection will also allow for the first public presentation of an almost unknown work by Esquivel that has recently been added to the Museum’s collection.

These portraits reveal different interpretations of childhood, a theme that became particularly popular among Romantic painters in a reflection of their clients’ new interests.

The idea of childhood as a period of life with its own merits rather than a mere preliminary to adulthood emerged in the Enlightenment and achieved its maximum expression with Romanticism, given that childhood embodied qualities highly appreciated by that movement such as innocence, closeness to nature and uncontaminated sensibility. As a result, portraits of children were frequently commissioned by middle-class clients. During this period the best portraits of children were painted at the court in Madrid. In his portrait of Luisa de Prat y Gandiola, subsequently Marchioness of Barbançon Vicente López adheres to the classicising model, portraying his sitter as a small-scale woman, although his depiction of nature as a setting associated with childhood is notably modern. While this is also the case with Rafael Tegeo, his Seated Girl in a Landscape conveys more of a sense of a child. Federico Madrazo - who refers to models devised by Velázquez in his Portrait of Federico Flórez Márquez – and Luis Ferrant, who looks to the Spanish Golden Age tradition in Isabel Aragón Rey, skilfully adapted this style to the academic formulas of Romanticism. Reflecting European bourgeois fashion, Carlos Luis Ribera and Joaquín Espalter presented their sitters in parks, as in Portrait of a Girl in a Landscape and Manuel and Matilde Álvarez Amorós, respectively.

Another important artistic centre was Seville where artists such as Antonio María Esquivel and Valeriano Domínguez Bécquer trained. These painters were influenced by the tradition of Murillo and his use of warm, golden backgrounds against which the textures of his child models’ faces and hands stand out, as well as by British portraiture with its preference for graceful poses and outdoor settings. New addition to the Prado’s collections. This almost unknown work is now being presented to the public for the first time since its acquisition in 2016.

Esquivel’s painting is unique within Spanish Romantic portraiture and constitutes a complete expression of Rousseauesque, liberal ideas on free education (the word “free” appears on the dog’s collar in the painting) championed by the father of the child sitters, the Cuban writer and journalist José Güell (1818-1884). In his book Tears of the Heart, Güell dedicated a poem to his son Raimundo which includes verses that could have inspired the composition of Esquivel’s painting: “Don’t fear to live in poverty / If you can breathe pure air, / And see the sunlight and the grandeur / Of the night that fills the dark sky / […] Nor adorn your brow with laurels, / Nor let the sun ever see you, / Absurdly dressed in finery / Or wearing the livery of power.”

Dressed only in fur pelts, the two boys are presented as Arcadian shepherds who represent a proclamation of liberalism in their act of freeing goldfinches from a cage. Painted in a clearly sculptural manner characteristic of Esquivel’s final period, this portrait was selected by the artist for inclusion in the first of the National Fine Arts Exhibitions in 1856. 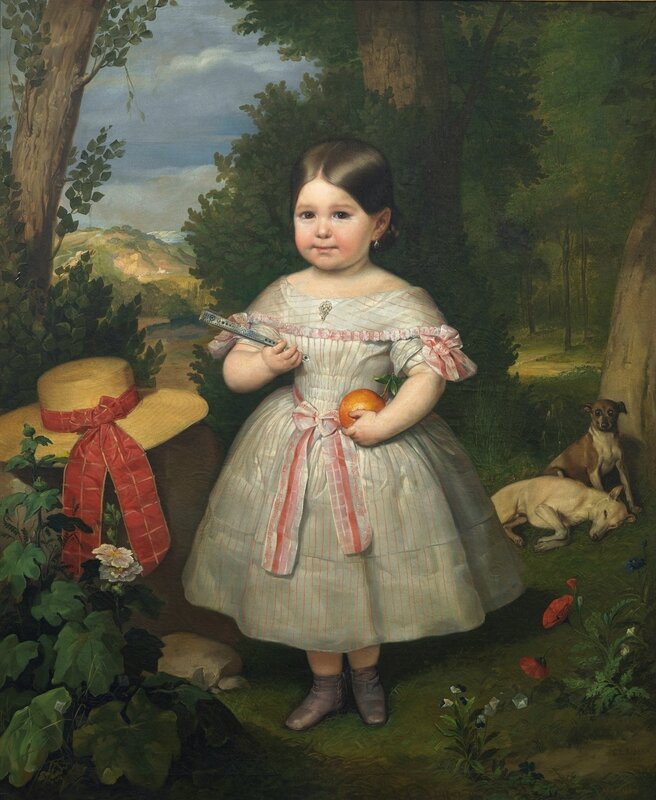