MADRID.- Having previously been seen in Antwerp, the Museo del Prado is now showing the The Art of Clara Peeters, an exhibition on this female painter who formed part of the first generation of European artists to specialise in still-life painting and was among the very few women to devote her professional activities to painting in early modern Europe.

The presence at the Prado of this group of fifteen major works by Peeters will emphasise the achievements of this highly gifted and exquisite artist, whose known surviving oeuvre numbers barely 40 paintings.

Both the exhibition and its accompanying catalogue reflect the most recent scholarship on the artist’s life and work, locating Clara Peeters in the cultural and artistic context of Antwerp and also drawing attention to the situation of women artists on the threshold of the modern era when their opportunities were hindered by widespread prejudices. Clara Peeters devoted her activities to still-life painting, deploying a style that emphasised the real appearance of things. These two factors reflect firstly an entrepreneurial spirit and forward-looking mentality, given that when the artist first began to work in this genre in the first decade of the 17th century only a few works of this type were to be found in collections in the Southern Netherlands. Secondly, realism was seen as an alternative to the idealism of the Renaissance tradition.

The still lifes in the exhibition, painted between 1611 and 1612, come from private collections (six); northern European museums (three); the UK (one); the USA (one); and the Prado itself (four). These fifteen paintings depict fish and fowl ready to be cooked; already cooked food displayed on the table; and serving vessels, cutlery and other objects, most of them costly, luxury items and all painted with painstaking detail in the description of the forms and textures, using an elegant contrast between brightly lit objects and dark backgrounds which contributes to creating an overall sensation of sobriety. These paintings by Peeters reveal the tastes and habits of the most prosperous classes at the outset of the modern age and include imported goods and foodstuffs such as sweetmeats, wine, fruit and fish (Peeters was the first artist to make the latter the principal subject of some of her still lifes), as in Still life with fish, candle, artichokes, crabs and prawns; hawks or falcons next to dead fowl (representing the first still lifes on the subject of the hunt, an activity associated with the aristocracy), as we see in Still life with peregrine falcon and its prey; and shells, which were highly prized for their exotic origins and unique beauty, as in Still life with pastry, silver tazza with sweetmeats, porcelain, shells and oysters.

Peeters’ paintings include numerous other types of objects that can be associated with wealth, good taste, education and culture such as pieces of porcelain, silver-gilt goblets and cups, blown glass objects and silver salt cellars. Another element that the artist often included in her still lifes was her own selfportrait reflected on the surface of vases and goblets. These almost invisible details are to be found in at least eight of her works, of which six are in the present exhibition. In Still life with flowers, a silver-gilt goblet, almonds, dried fruit, sweetmeats, bread sticks, wine and a pewter jug Peeters is reflected on the silver-gilt goblet and the pewter jug, wearing a headdress, ruff and high dress with raised shoulders. Other examples, including Still life with fish, candle, artichokes, crabs and prawns, Still life with herring, cherries, artichoke, jug and porcelain plate with butter, Still life with cheeses, almonds and bread rolls, and Still life with cheeses, prawns and river crabs include just the artist’s head reflected on the lids of the jugs. On the surface of the goblet on the right in Still life with flowers, gilt goblets, coins and shells we see at least six self-portraits of Peeters, holding her brushes and palette and upholding her status as a woman painter, encouraging the viewer to acknowledge her existence. These self-portraits also reveal the level of Peeters’ artistic skills in her ability to depict herself on such a minute scale.

The scarcity of documentary references to Clara Peeters makes her paintings a particularly important source of information on this artist, a contemporary of Jan Brueghel the Elder, Rubens, Snyders and Van Dyck and thus active during one of the great periods in the history of European art. Clara Peeters was a pioneer in the field of the still life and one of the few women artists in the early modern age to devote her activities to painting. A number of accounts indicate that she worked in Antwerp although she may have travelled to Holland. While she is not registered in the painters’ guild in Antwerp she is described in a document as a painter from there. In addition, at least six of the panels that she used for her paintings have marks on them indicating that they were prepared there. Finally, on the blades of three of the silver knives to be seen in her works is her name and a hallmark of the city of Antwerp. These knives, which diners took to banquets, were used as wedding gifts. The presence of Peeters’ name on them may refer to her own marriage, which is not documented.

The fact that Peeters’ works were widely distributed, being present in collections in Rotterdam, Amsterdam and Madrid, suggests that she aimed to achieve financial profit from her activities, working in a highly professional manner and exporting her paintings through dealers. On the other hand, differences between the manner of painting these works suggest that she made use of studio assistance. 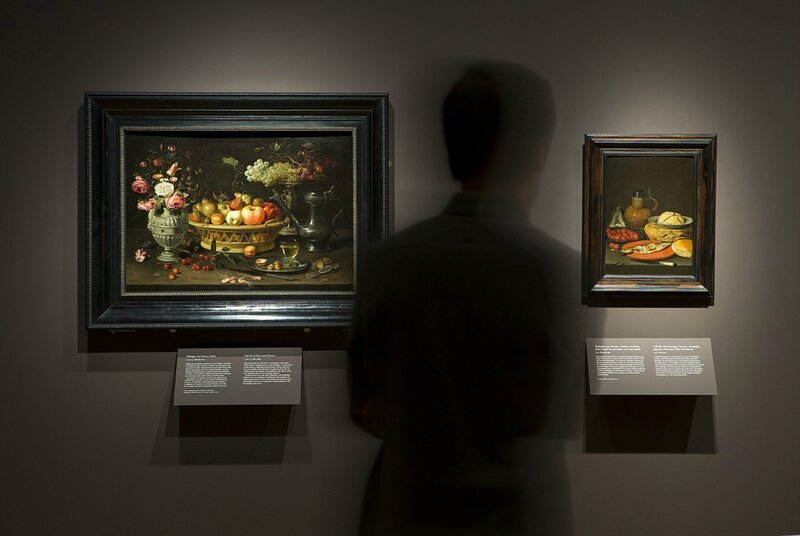