VIENNA.- From the beauty of refined, jewel-like floral arrangements to hard-drinking peasants fighting in the mud, both the high and the low elements of 17th century Flemish and Netherlandish life are represented in Dorotheum’s Old Master Paintings sale on 8th June 2021.

The prowess of the painters of the Low Countries was such that they were much sought-after and travelled far and wide around Europe. Works by some of the greatest exponents are included in our sale; from Peter Paul Rubens, who was the quintessential European statesman and served as emissary to several noble courts, to Roelant Savery, who undertook expeditions to the Tyrol on behalf of Rudolf II, collecting naturalia for the Emperor’s Wunderkammer in Prague, and Paul Vredeman de Vries, who decorated the ceilings of Rudolf’s palace, as well as the grand, renaissance town hall in Gdansk.

What was it about these masters who recorded the natural world around them that so captivated their royal patrons? Perhaps it was the fact that their paintings offered more than the sumptuous images alone, often also containing subtle subtexts for their viewers’ attention. Our cover lot for example, the beautiful collection of flowers by Roelant Savery, can be read as a commentary on eternity: a lizard shedding its skin on the ledge at the bottom of the painting symbolises rebirth, while the fact that this composition is naturally impossible - these different plants would never have bloomed in the same season – is a reflection on time itself (€ 200,000 - 300,000). 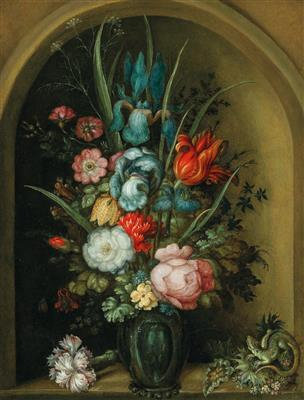 Rubens’s composition, largely executed by his accomplished workshop, draws on the peasant pictures of Pieter Bruegel the Elder, who while capturing the rollicking, rural frenzy of revelry in village squares, often made hidden references to proverbs or biblical episodes - here perhaps intending a cautionary tale of gambling and drunken excess (€ 200,000 - 300,000). Finally, Vredeman de Vries’s capriccio of an imagined, perfect palace, plays with perspective, and in doing so, perception itself, whilst drawing on the long-established Flemish tradition of depicting celestial cities and shining colonnades as pictorial stand-ins for heaven (€ 60,000 - 80,000). Indeed, with each of these pictures, the modern-day collector can own a slice of the timeless artistic reverie that the crowned heads of Europe sought in their own private rooms and galleries, courtesy of the masters from Flanders.