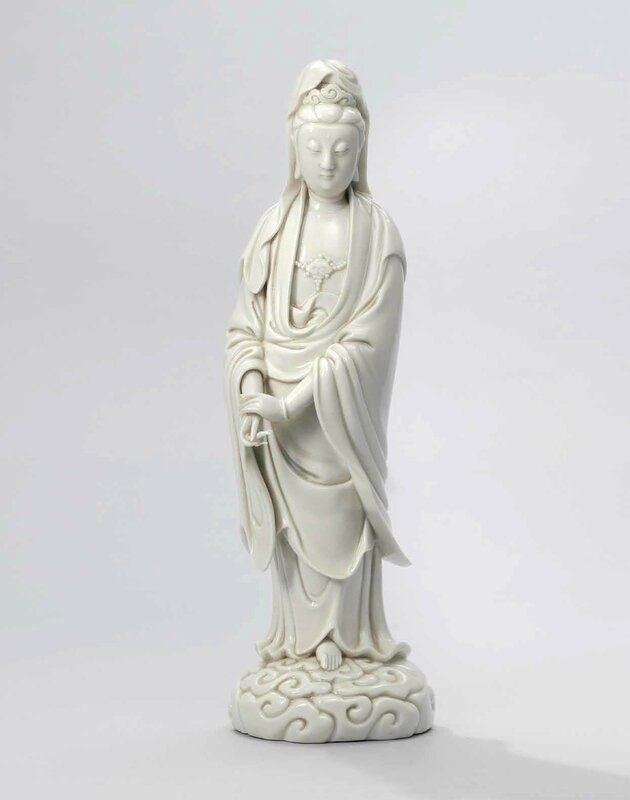 The deity is elegantly modelled standing on a domed base modelled as swirling waves. Finely detailed, the eyes are downcast with lips gently indented to provide a benevolent expression. Dressed in a voluminous robe, the figure is adorned with a bejewelled necklace spanning her chest, her hair is swept behind a diadem and partially hidden under a cowl. The figure’s back is impressed with the maker’s seal mark, ‘He Chaozong’ within a double-gourd outline. 12 1/4 in. (31 cm.) high, box

Notes: The present figure is one of a small group from the Dehua kilns bearing the seal impression of the celebrated potter, He Chaozong. As his dates are unrecorded, He Chaozong was previously thought to have worked in the first half of the 17th century. Recent research has revealed that he was already active in the 16th century and some Chinese scholars even believe him to have been active as early as 1522 (see R. Kerr, ‘Introductory Remarks on Dehua Ware, in John Ayers, Rose Kerr, et al., Blanc de Chine: Porcelain from Dehua, A Catalogue of the Hickley Collection, Singapore, Richmond, UK, 2002, p. 10).