The vessel is well cast as a standing mythical bird with the head facing forward, carrying a twin-handled vase decorated with monster masks between a pair of upswept wings, all intricately inlaid in gold and silver in contrast to the dark patina. The long tail cascades downwards, centralised by a trail of upright geometric stylised scrolls running along the spine and ending in a curled tip.

This handsome bird, which most closely resembles a phoenix, is usually known in Chinese as a ‘heavenly chicken’ 天 雞 tianji. In Views of Antiquity in the Qing Imperial Palace, Macau, 2005, p. 182, the authors explain the reason for this name is that 雞ji chicken provides a pun for 吉 ji meaning auspicious, and thus the bird is a symbol of good fortune. In addition, a rooster is a symbol of high rank because of its of its cockscomb, 雞 冠 jiguan in Chinese, which is a pun for 官guan, meaning official. The vase on the bird’s back also has auspicious connotations. The vase can be either 瓶 ping or 壺 hu. Ping is a pun for 平安 ping’an, meaning peace, while 壺 husuggests one of the isles of the Immortals 方 壺Fanghu. The vase may also suggest the vase 罐 guan which is one of the Eight Buddhist Emblems 八吉祥 ba jixiang. In this context the vase symbolises the elixir of life as well as containing treasures, which represent all wishes fulfilled.

This inlaid bronze bird and vase group is a fine example of the art objects made in the late Ming-early Qing period, which reflect a passionate interest in antiquities not only within the scholar class, but also amongst the upper echelons of the newly wealthy merchant class. While a relatively small proportion of the population would have had access to real antiques, the availability of illustrated books on antiques grew exponentially in the late Ming period. During the Song dynasty not only had there been a great interest in the books relating to ancient bronzes and their inscriptions, but a significant number of ancient sites were excavated, adding to the ancient works which had already been brought to the marketplace by farmers who had found precious antiques during the course of their agricultural activities. Extensive collections were built up – the best known being that of the Emperor Huizong (r. AD 1101-26), who was rumoured to have amassed a collection of some ten thousand items. The illustrated catalogues of these collections provide a rich source of information about these collections, and also provided a rich source of inspiration for bronze craftsmen of later periods, often through later editions of the Song dynasty publications. The earliest of these Song dynasty illustrated publications on antiquities, which survives to the present day, is the 考古 圖 Kaogu tu(Illustrated Research on Archaeology) compiled in 1092 by 呂大臨 Lü Dalin, a supplement to which – completed by another author – was published some 70 or 80 years later. The original Kaogu tu dealt with inscribed pieces from a number of different collections, including items from the imperial collection (for an illustration from the 1601 edition of the Kaogu tu, see R. Kerr, Later Chinese Bronzes, London, 1990, p. 14, pl. 2). The Kaogu tu also set a precedent in terms of organisation and illustration for future publications of this type.

Perhaps the best known of these early illustrated catalogues of ancient bronzes is the 重修博古圖錄 Chongxiu Xuanhe bogu tulu (Drawings and Lists of all the Antiquities stored in the Xuanhe Palace) , which was compiled by 王黼Wang Fu on the orders of the Emperor Huizong around AD 1123 and included some 840 bronzes – both inscribed and without inscription - from the palace collections (for an illustration of a goose-shaped pouring vessel – dated in its caption to the Zhou dyansty - from the 1588 edition of the Xuanhe bogu tulu, see R. Kerr, Later Chinese Bronzes, op. cit., p. 16, pl. 3, while a Song dynasty goose-shaped inlaid bronze pouring vessel in the Victoria and Albert Museum is illustrated in pl. 4 ). According to the Xuanhe bogu tulu all the pieces listed belonged to the Shang Zhou or Han periods, while in fact it is clear that a number of them date to later periods, such as the Tang dynasty. Mistakes of this sort caused considerable confusion, a fact that was recognised by contemporary scholars. In the preface to金石錄 Jin Shi Lu (Collection of Texts on Metal and Stone) a book of rubbings from some 2,000 inscriptions compiled between 1119 and 1125, Zhao Mingcheng (趙明誠 1081–1129) and his wife the poet Li Qingzhao (李清照 1084 – c. 1155) pointed out:

‘When archaeological materials are used to examine these things, thirty to forty per cent of the data is in conflict. That is because historical writings are produced by latter-day writers and cannot fail to contain errors. But the inscriptions on stone and bronze are made at the time the events take place and can be trusted without reservation.’ (translated by Craig Clunas in Superfluous Things – Material Culture and Social Status in Early Modern China, Cambridge, 1991, pp. 95-6)

Craig Clunas has also pointed out that two famous Ming dynasty literati, Wang Qi (王錡 1433-99) and Wen Zhenheng (文震亨 1585–1645), like their Song dynasty predecessors, were wrong about many things, including the belief that bronzes inlaid with gold and silver dated to the Xia dynasty (夏朝c. 2070-1600 BC), when in fact they should have been dated to the Warring States period (475–221 BC) or later (see Clunas, Superfluous Things – Material Culture and Social Status in Early Modern China, op. cit., p. 99). It is likely, therefore, that when the current bird and vase group was made, it was mistakenly regarded as copying inlaid bronzes of the Xia dynasty.

A smaller Ming dynasty inlaid bronze version of the bird and vase group with the addition of a handle to allow its use as a water dropper is in the collection of the National Palace Museum, Taipei (illustrated in Through the Prism of the Past: Antiquarian Trends in Chinese Art of the 16th to 18thCentury, Taipei, 2003, p. 49, no. I-24). It is interesting to note that an inlaid bronze vase of similar style to the one on the back of the bird in the current group is also in the National Palace Museum collection, illustrated in the same volume, p. 59, I-34. The Taipei vase has a lid and is dated to 10th-17th century, Song-Ming period. Two more inlaid bronze bird and vase groups from the National Palace Museum, Taipei, are illustrated in the same volume. One, dated to the Ming dynasty, which is very similar in form to the current group, but has a vase of gu or zun form, is illustrated on page 175, no. III-43 (fig. 1), the other, which has a handle attached to the vase on its back and is dated 17th century, late Ming dynasty, is illustrated on page 190, no. III-59 (fig. 2). 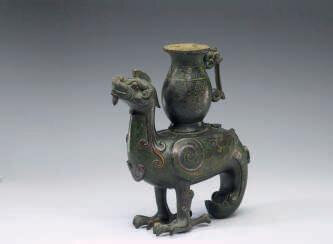 Several versions of this group with the addition of two wheels were made in the late Ming and the Qing Qianlong reign. A bronze bird of essentially similar form to the current bird, but with a gu-type vase on its back, a pointed beak and the addition of wheels is in the collection of the National Palace Museum, Taipei, illustrated in Through the Prism of the Past: Antiquarian Trends in Chinese Art of the 16th to 18th Century, op. cit., p. 174, No. III-42, where it is dated to the late Ming dynasty, 16th-17th century. A similar bird and vase group with wheels is illustrated in the 西清古鑑 Xi Qing gujian (catalogue of some 1530 bronzes in the collection of the Qing dynasty Qianlong Emperor, compiled between 1749 and 1755) see a page from the 1908 edition illustrated by R. Kerr in Later Chinese Bronzes, op. cit., p. 77, pl. 61. The caption in the Xi Qing gujian dates the piece to the Han dynasty.

The current magnificent bird is therefore not only auspicious, but it is also an important part of the history of archaism in the arts of China.