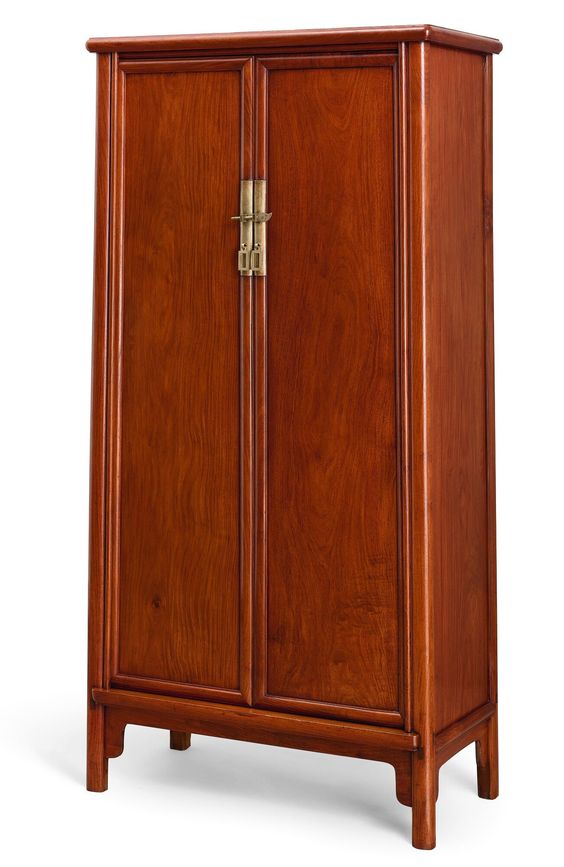 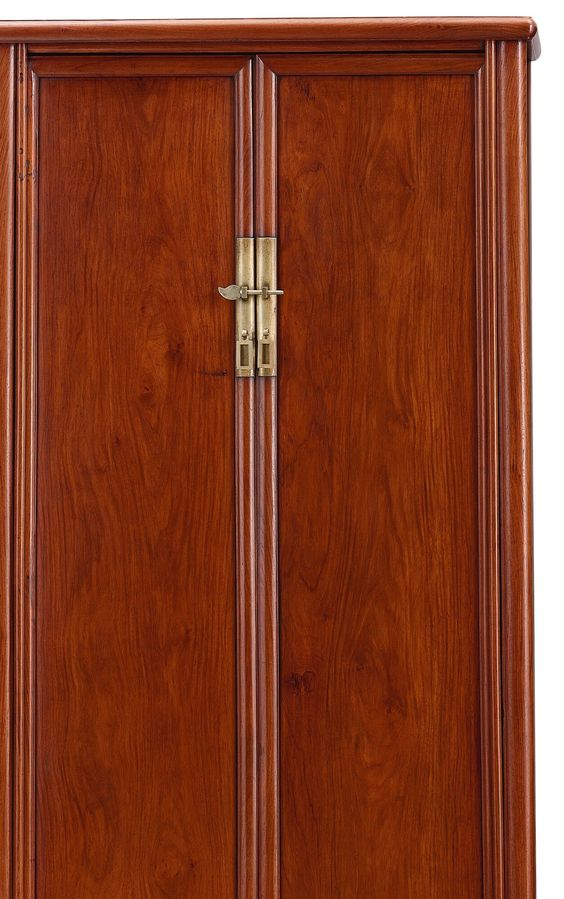 each of rectangular section and surmounted with a cabinet top with a round edge beginning and ending with a narrow flat band, supported on four recessed slightly splayed stiles at each corner forming the tapered silhouette, the front with a pair of single panel doors, each with a frame fitted with a curved metal plate adorned with a lock receptacle and door pull, a rounded-edged stretcher resting below the doors with a plain shaped apron beneath, the side aprons similarly left plain, the interior divided into three compartments.

Note: Cabinets of this form combine functionality and aesthetics through the harmonious balance of flat surfaces and round members, and the almost imperceptible outward splay of the recessed stiles. The striking swirling patterns of the huanghuali boards set into the door frame are in sharp contrast to the metal pulls and backplates, successfully drawing attention to the design. As aptly expressed by George N. Kates, cabinets of this type display the Chinese furniture markers’ "ability to handle inflexible wood in such masterly fashion that, almost unaware, one receives the impression of design in a living medium" (George N. Kates, Chinese Household Furniture, New York 1948, p. 32).

Known as yuanjiaogui, literally ‘round-corner cabinet’, cabinets of this type made their first appearance in the Ming period and are believed to derive from rectangular chests with pyramid-shaped lids, which gradually became larger. Their elegant tapered form added stability to the overall design and allowed the doors, which are fitted into sockets in the frame members, to easily swing open, making them ideal for storing clothes. Made in a variety of sizes and with round or square-section members, the present examples are particularly special for their construction as they lack the central stile (shuangan) between the doors.

A similar pair of cabinets is illustrated in Robert Hatfield Ellsworth, Chinese Furniture: One Hundred and Three Examples from the Mimi and Raymond Hung Collection, Hong Kong, 2005, pl. 3; and a slightly smaller version was sold at Christie’s New York, 21st March 2013, lot 926. Compare also a slightly larger example with a central stile, from the collection of the Marchesa Tailiani de Marchio, published in Gustav Ecke, Chinese Domestic Furniture, Tokyo, 1962, pl. 111, no. 90; and a pair also with cloud-shaped spandrels on the legs, in the Nelson Atkins Museum of Art, Kansas City, illustrated in Wang Shixiang, Connoisseurship of Chinese Furniture. Ming and Early Qing Dynasty, Hong Kong, 1990, vol. II, pl. D23.