The dog in lying on a rectangular base with its head turned sideways. His right foreleg is crossed over the left. The eyes, eyebrows, snout and other details are painted black on the bright blue faience. The body is also covered with large black spots. Upper part of a sarcophagus with the left remaining side of a tri-parted wig. The yellow painted face has large and prominent eyes beneath black arched eyebrows. The nose and lips are small and not underlined to give the eyes a stronger presence. The finely detailed wing of a falcon headed vulture headdress covers the blue and yellow striped wig ending in a large finely detailed floral border. Below the 'ib'- pendant worn around the neck, a black Inpw (Anubis as a jackal) 'he who is over the secrets', of secret words, rests upon a column of inscription: 'ji n(y)-sw.t' [htp] – 'May the king give [a boon]...' 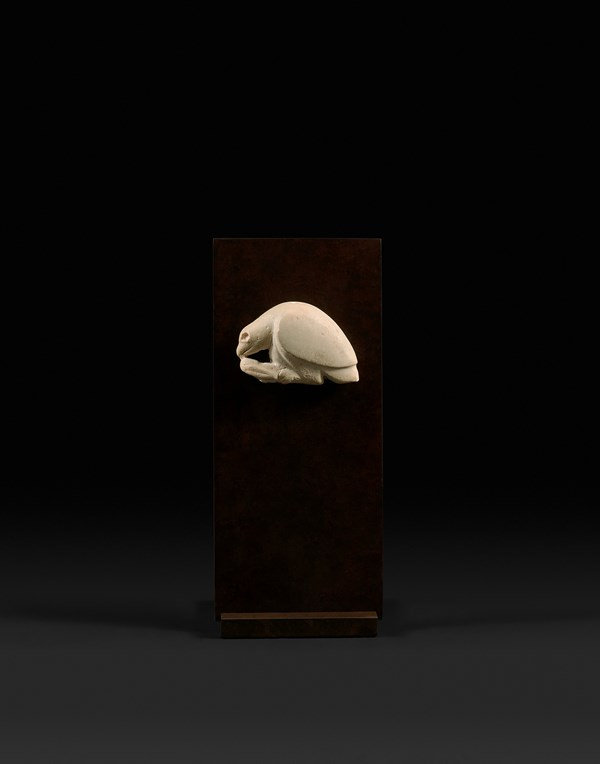 Carved calcite stamp seal in the form of a vulture devouring a hare, the beak grooved and the eye drilled, the long ears and one eye of the hare indicated. Five animals are bow-drilled on the base and there is a vertical piercing for suspension. This seal may have served as both an amulet and a stamp seal.