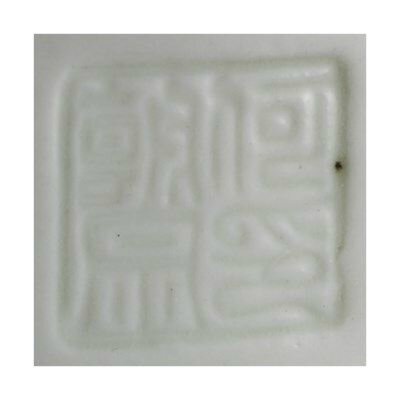 The graceful figure is superbly and skilfully modelled, standing on a vase spilling water and a lotus blossom amidst dramatic swirling waves, with the head turned slightly to the left. She is dressed in voluminous robes characterised by heavy folds that cover the hands, while open at the chest to reveal a bejewelled necklace. The face has a benevolent expression and serene smile rendered with the urna of wisdom and with pendulous earlobes. Her hair is arranged beneath a cowl and secured with a ruyi-head diadem. The four-character markHe Chaozong yin in seal characters is impressed in relief on the back of the figure. An even creamy, ivory-tinged glaze has been applied to the figure overall.

Note: The goddess Guanyin, also known as the bodhisattva Avalokitesvara,was one of the most popular figures around the late sixteenth and early seventeenth centuries, a period in which the sculptural style of images of Guanyin was expanded. Elements, such as the draperies on the robe swept gracefully to one side contrasted with the turbulent waves on the base, can be connected to styles popular with late-Ming and early-Qing paintings depicting religious figures. Among these, figures of Guanyin created by He Chaozong, the most celebrated master potter of the Dehua Kilns in Quanzhou, Fujian, are particularly rare. Their distinctive form is most notably seen in the arresting expression of the deity as well as the attention paid to detail, such as his extraordinarily deft handling of the drapery with its naturalistic folds and thin, razor-sharp edges, and the sensitive modeling of the face, fingers and toes.

The exact dates of He’s life remain unclear. However, two dated Guanyin figures from Dehua might be good evidence that he was active around the Jiajing and Wanli periods, although some scholars believe him to have been active as early as 1522 (see Rose Kerr, et al., Blanc de Chine: Porcelain from Dehua, A Catalogue of the Hickley Collection, Singapore, 2002). One was incised in front at the foot of the throne with the characters jiwei nian (corresponding to 1559, 1619, or 1679), which is illustrated in John Ayers, Blanc de Chine: Divine Images in Porcelain, China Institute Gallery, New York, 2002, No. 25. Together with the citation from the introduction to the 1763 Quanzhou Gazette, this is the only written record for dating the work of He Chaozong. The other evidence, also a cyclical date written on the mandala of a seated Guanyin and referring to the year of Wanli’s reign corresponding to 1618, appears on a figure in the Stephen D. Winkwork Collection, which was first illustrated in R.L. Hobson, The Wares of the Ming Dynasty, London, 1923, plate 45, fig. 1, and subsequently published in Robert Blumenfield, Blanc de Chine: The Great Porcelain of Dehua, Berkeley 2002, pp. 164-165, in the collection of the author.

This figure belongs to a group of the very few large Dehua standing Guanyin made by He. An almost identical example, of the same height as the present lot, was formerly part of the Edward T. Chow Collection and, later, the Koger Collection at the John and Mable Rinling Museum of Art, the State Art Museum of Florida. It was included in the exhibition catalogue Blanc de Chine: Divine Images in Porcelain, New York, 2002, plate 26, and illustrated in M. Beurdeley and G. Raindre, Qing Porcelain, Famille Verte, Famille Rose, London, 1987, plate 333, and again in Blanc de Chine, by S. Marchant & Son, London, 1985, No, 1.

It may also be compared with two very similar pieces slightly shorter in height: the first is 48 cm. high, with less detailed carving on the wave-base, and is now in the Shanghai Museum, which has never been published but was exhibited in the Museum in 1995 and 2007; the other, 46 cm in height, now in the Quanzhou Maritime Museum, is classified as a grade one cultural relics of the state and is illustrated in Zhongguo taoci quanji: Fujian taoci [Series of Chinese Ceramics in Chinese Collections: Fujian Ceramics], Shanghai, 1983, plate 105.

Apart from models of elegant Guanyin standing above waves, He Chaozong also produced the characteristic figure of Guanyin standing on clouds with the left hand crossed over the right hand. Three examples of this type of figure can be found. One, in the Victoria and Albert Museum, London, was depicted in Patrick Donnelly, Blanc de Chine, London, 1969, plate 145A; one, is in the collection of the Fujian Provincial Museum, whose figure was exhibited in Hong Kong and illustrated on the cover of Dehua Wares, Fung Ping Shan Museum, The University of Hong Kong, Hong Kong, 1990, Catalogue No. 113; one, is in the Dehua Ceramic Museum, published in Dehua taoci bowuguan guancang, Fuzhou, 2011, plate 91. See, also, there is one example which is attributed to He Chaozong, is to be found in the Rijksmuseum, Amsterdam, illustrated in Christiaan J.A. Jörg, Chinese Ceramics in the Collection of the Rijksmuseum, Amsterdam: the Ming and Qing Dynasties, London, 1997, Catalogue No. 281, p. 245.

He Chaozong-marked series of Guanyin figures have several manifestations in seated poses, such as one with a leg raised and the hands concealed by the heavy folds of the robe, which can be seen in the collection of the Palace Museum, Beijing and is illustrated in Classics of the Forbidden City: Guanyin in the Collection of the Palace Museum, Beijing, 2014, plate 176; another seated cross-legged on a similar pedestal is in the Musée Guimet, Paris, and is illustrated in Oriental Ceramics: The World’s Great Collections, Tokyo, 1981, Vol. 7, colour plate 31; and one, which does not appear to be published, seated with right knee raised, holding a ruyi in her left hand, now in the Chongqing China Three Gorgers Museum.

The impressed mark of He Chaozong is commonly seen either within a double-gourd outline or in a square format, as in the case of the present figure. For relative discussion on He Chaozong’s potter’s mark, see P.J. Donnelly, Blanc De Chine, New York, 1967, pp. 155-156, 354-356.